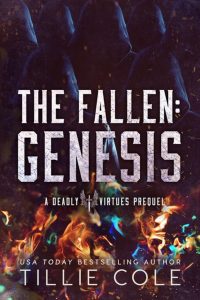 Holy Innocents Home for Children is a haven for orphaned boys who have nothing and no one.
The priests watch over them, educate them, raise them in the family of the church.

Seven of the orphans are no ordinary boys. They attract the attention of the priests for their acts of violence,
of bloodlust. The priests realize these boys are drawn to the darkness.

And the priests are no ordinary priests. They are the Brethren, a secret sect who believe themselves on a divine mission to seek out evil in the boys in their care. Seek it out, and then drive it out.

The seven have fallen from God’s grace. And the Brethren will cleanse their blackened souls…

The Fallen: Genesis is a prequel novella in The Deadly Virtues Series and MUST be read before RAPHAEL (DV: book one).