Ash
Despite everything I've done for my parents, I'll never be good enough for them. Instead of seeing a man to be proud of, they just see an embarrassment. I served four tours in Afghanistan but that doesn't mean anything to them. They only see the ink, the party life, and my short stint in jail.

But now they refuse to pay me back until I become the man they think I should be.

I have an unusual professional.

I escort men, acting as their date to family functions or work parties. It's my job to act deeply in love with my client. And I always nail it.

But it's not what you think.

I'm not a prostitute.
I'm not a call girl.
I'm an actress.
Get it right.

There are strict rules when it comes to my profession. There is no touching, kissing, or anything but hand-holding. Those who choose not to comply will get a swift kick in the nuts.

But all this goes to hell when Ash walks into my life.

I got to the coffee shop early and sipped my coffee. I had so many of these meetings that they blurred together. It was easy to forget names and faces. I knew this guy’s name was Ash, and apparently he was hot.

My clients were hardly ever cute. If they were, what would they need my services for? But I did enjoy my job because it was fulfilling. I helped people get through difficult times.  I was even friends with some of them.

The door opened and a tall man walked inside. He wore dark jeans that hung low on his hips and a dark green t-shirt. He had wide shoulders that reminded me of a soldier, and his chest looked broad and powerful. He was more than just fit. He looked extremely athletic, like a marine or something.

He had dark brown hair and fair skin. His eyes were blue like the ocean, and they were endless in their depth.

Damn, he was hot.

His arms were covered in sleeves of tattoos. Instead of being all black ink, there were various colors. Green, orange, and blue were prominent colors, and they were highlighted under the fluorescent lights.

There was no way he was my client. That would be a dream come true.

My review of Into the Fire 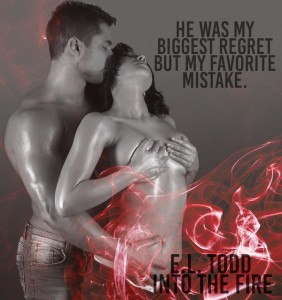