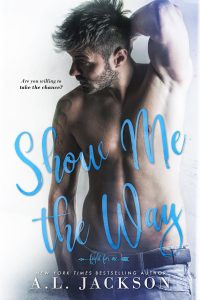 Rex Gunner. As bitter as he is beautiful.

The owner of the largest construction company in Gingham Lakes has been burned one too many times. His wife leaving him to raise their daughter was the last blow this single dad could take. The only woman he’ll let into his heart is his little girl.

Rynna Dayne. As vulnerable as she is tempting.

She ran from Gingham Lakes when she was seventeen. She swore to herself she would never return. Then her grandmother passed away and left her the deed to the diner that she once loved.

When Rex meets his new neighbor, he knows he’s in trouble.

She’s gorgeous and sweet and everything he can’t trust.

Until she becomes the one thing he can’t resist.

One kiss sends them tumbling toward ecstasy.

But in a town this size, pasts are bound to collide. Caught in a web of lies, betrayal, and disloyalty, Rex must make a choice.

Will he hide behind his walls or will he take the chance . . .

Tension roiled between us. That tether pulled taut. Drawing us closer. I swallowed around it and reached for the latch. He was quick to open his door, jumping out and rounding to my side before I had time to step out of his massive truck. He helped me down, and his hand scorched where he aided me by holding on to my elbow.

“Let me walk you to the door. Last thing I need to be worried about is you here by yourself and some asshole taking advantage of you.”

He quirked this belly-flopping grin that pierced me like an arrow. “Unless of course that asshole is me.”

He barely angled his head to the side. There was something so endearing and self-deprecating about it. Everything about him right then was at odds with the surly, bear of a man I’d met weeks ago, the man exposing himself, layer by layer.

I lifted my chin, both in strength and vulnerability, tossing all the uncertainties and questions out into the open. “Should I be afraid?”

“Yeah, you should be.” His response was hard, but there was no missing the fact his irritation was aimed at himself. He set his palm on the small of my back, helping me through the gravel drive in my heels, an inch behind as we ascended the porch steps.

We crossed the planks. That tension wound higher with each step until we were nothing but needy pants at my door. Slowly, I turned around to face him.

His presence sent a ripple of energy vibrating across the floorboards, the overwhelming sight of him the owner of my breath.

He stood beneath the faint glow of the hurricane lamp that hung outside the door. A sculpture of sinewy muscle and raw strength, forged through years of obvious physical labor. Every inch of him was rugged, from those roughened, callused hands to the crinkles set deep at the edges of his eyes.

The man was a carving of pure, daunting beauty.

“What exactly am I supposed to be afraid of, Rex?” My brow twisted, and my voice quieted with the admission. “Because when I’m around you, the last thing I feel is afraid.”

“I fuck everything up, Rynna, and the only thing I’ve got to offer you is my mess. I can’t do this.”

Restraint rumbled in his chest, the sound so deep I felt it shake the ground beneath my feet.

I gently cupped one side of his rugged face. “I’m not afraid.”

It was a promise.

“You should be,” he grated. “Warned you, my shit doesn’t ever end well.”

He groaned and he planted his hands high above my head. The man panted above me, torn, desperate, his nose just brushing mine. “God damn it, Rynna. God damn it.”

I felt the moment he broke. When the thread pulled too tight and this mesmerizing man snapped. His mouth descended on mine.

Lips and tongue and nips of teeth.

And those hands. They were on my face. My neck. My waist. Somehow, I managed to hold on to him and spin away as I fumbled with the lock. He pressed against my backside, his cock against my bottom, and his mouth leaving a trail of fire at the side of my neck. We stumbled into the darkness of my house, breaking apart as I turned to face him.

The only light trickled down from the lamp I’d left on upstairs.

Slowly, he clicked the door shut behind him. We stood there, two feet away from each other, staring.

A tangle of tongues and bodies.

The man frantic, trying to touch me everywhere.

I pushed up on my toes and tore my mouth from his so I could kiss down the strong column of his throat. His head thudded back against the door, his entire body pressing against it as if he needed it to keep him standing.

He grated my name, and I kept kissing at his throat while I worked free the button on his jeans, hands shaking.

Every reservation spun out of control.

It was only spurred further when the defined muscles of his abdomen jumped and twitched beneath my touch, when he mumbled, “You’re killing me, Rynna. Fucking killing me.”

Desire rippled from him in heady waves.

And I felt so brave and bold, my kisses brazen as I nipped at the hollow of his throat.

Before I could consider it—the ramifications and the repercussions and the distinct threat to my heart—I dropped to my knees.

I refused to think of anything but setting him free.

Hoping he’d find a little of that freedom in me. 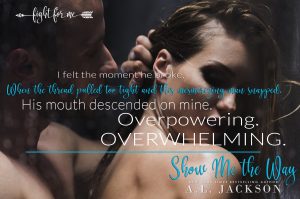 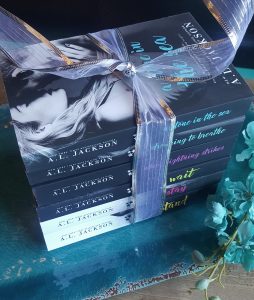 A.L. Jackson is the New York Times & USA Today Bestselling author of contemporary romance. She writes emotional, sexy, heart-filled stories about boys who usually like to be a little bit bad.

Her bestselling series include The Regret Series, Closer To You, as well as the newest Bleeding Stars novels. Watch for the next installment Stand, coming Spring 2017.

If she’s not writing, you can find her hanging out by the pool with her family, sipping cocktails with her friends, or of course with her nose buried in a book.

Be sure not to miss new releases and sales from A.L. Jackson - Sign up to receive her newsletter http://smarturl.it/NewsFromALJackson or text “aljackson” to 24587 to receive short but sweet updates on all the important news.

One Response to “Excerpt reveal: Show Me the Way ~ A.L. Jackson”