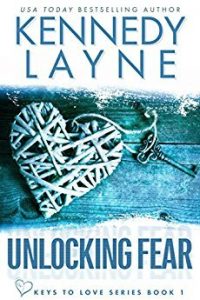 A chance mishap with a sledgehammer was the sole reason a chilling nightmare was unleashed in Blyth Lake.

Noah Kendall’s grisly discovery left him in the middle of a murder investigation and a neighbor who knew more than she was willing to say. Reese Woodward had returned to town with dark secrets, and he was determined to unravel them. While evil lurks in the darkness, seduction burns between them…only time was their enemy.

Will her secrets destroy what they’ve built, or can he earn her trust before the killer strikes again?

The deepening shadows stretched out across the small cluster of trees, causing the footpath to become somewhat obscured by the dark. The dying leaves that covered the floor of the woods rustled as the cool October breeze turned into a strong gust of wind.

A storm must be rolling into town.

Emma didn’t slow down her pace. She was already an hour late for her curfew, but at least this old shortcut would take ten minutes off her trip home. Her parents would probably ground her for at least a week, if not more. She needed to find a better way to sneak back inside the house. The back door squeaked horribly. It could wake the dead.

What was the odd chance her sister would cover for her?

Emma grimaced, already knowing the answer to that question. This was all Shae’s fault, anyway. Why did she always get the car, just because she was older? It was so unfair that she didn’t have to share.

Emma quickened her pace despite the darkness and the chance of tripping over a root. She imagined that she could walk this route with her eyes closed just as easily. She’d come this way a thousand times over. It was used by most of the kids who were still relegated to riding their bikes and walking out to Yoder’s farm to party, especially since most of them lived on the far side of the old woods in town.

A twig snapped in the distance, bringing her up short. Its piercing crack echoed off the trees. Was someone else walking home?

Emma waited for a reply, wincing when her voice was amplified through the small stretch of woods. She tried to peer through the trees, expecting to see Brynn or Julie, but it was too dark to make anything out beyond a few yards.

The faint and comforting sound of her favorite song drifted from the old farmhouse. She looked over her shoulder, still able to make out the orange sparks rising from the top of the raging bonfire as they reached into the night’s sky. It was almost as if the flames were dancing, reminding her of how Billy held her in his arms earlier as they swayed to the music.

Emma smiled as she wrapped her arms around her waist in an effort to keep warm. She could still smell the bonfire on her sweater, along with his father’s cologne that Billy had been wearing. Maybe he graduated to buying his own though, choosing from the limited selection at Murphy’s dry goods. Not eve n the chilly night air could take away her happiness at having secured a chance at a relationship. She’d waited so long for him to notice her.

Tonight had been as perfect as it could get.

Now all she had to do was figure out a way to sneak into her house without her parents catching her in the act or that stupid door screeching out into the night. She needed to be able to say yes to Billy if he asked her out for next weekend. And he would, she was sure of it.

Emma slowly spun around looking for the source o f the noise, not seeing anyone or anything. A quick glance up at the sky told her that the clouds were gathering. She hesitated before walking deeper into the woods that would lead her right to the edge of Seventh Street and the town’s cemetery.

A vision of her standing by her school locker and saying yes to Billy had her continuing forward with a determined stride.

This annual bonfire wouldn’t be their last, of that she was certain, but it was one she would always remember.

She’d heard that old Yoder’s far m had been sold, so future get- togethers would most likely be in the clearing on the north side of the woods. She noticed the new owners had even started renovating the farmhouse, but that hadn’t stopped Chad Schaeffer from organizing one last bash out by the farm pond. It was a miracle the sheriff hadn’t cruised by earlier and sent everyone home. He was usually a real stickler when it came to parties involving the local teens.

No one recognized the name of the new owner. There were no relatives of the Yoders around these parts anymore, so the town council must have decided to auction off the land after clearing it with the courts. She’d meant to ask her dad how someone determined if a piece of property was derelict. She’d heard a teacher talking about it in class. It probably had something to do with property taxes.

Emma hadn’t wanted to bring up the matter, because then her dad would have figured out that she was part of the gang who hung out on the same property the town council complained about.

Now that would have earned her a grounding for at least a month or more.

There was a break in the clouds, allowing for the dirt path in front of her to suddenly became clear. She took another step forward before realizing something was quite wrong, but by then it was far too late.

Emma walked directly into the arms of her killer.

About the Keys to Love Series

Their homecoming wasn’t so welcoming. Four brothers and one sister each gave twelve years of their lives to serve their country and fulfill their family’s legacy of service. As each of them return to their home of record, they weren’t prepared for what awaited them—an unforgiveable sin that has been hidden for twelve long years. Secrets and lies are concealed in the dark shadows of the very town they were raised in, and the Kendall family will have no choice but to rely on one another to unravel the sinister evil that they all hold the keys to unlock.

Kennedy Layne is a USA Today bestselling author. She draws inspiration for her military romantic suspense novels in part from her not-so-secret second life as a wife of a retired Marine Master Sergeant. He doubles as her critique partner, beta reader, and military consultant. They live in the Midwest with their teenage son and menagerie of pets. The loyal dogs and mischievous cats appreciate her writing days as much as she does, usually curled up in front of the fireplace. She loves hearing from readers--find out how to connect with her at www.kennedylayne.com.