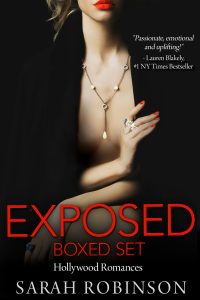 Ben Lawson is making a comeback…
After a few tabloid headlines, they think they know me. They don’t know a damn thing. As CEO of a movie production company, I’ll show them who I really am when we hit it big at the box office. My ex thought her smear tactics would ruin me, but I’m unbreakable. Rising from the debris, I swore I’d never let a woman distract me like that again. But then, my leading actress walked on the set and changed everything.

Seductive, sexy, and unapologetic, Aria Rose could break me. I wanted to help her, protect her…love her. Instead, I destroyed her.

Aria Rose is baring it all….
I knew better. I knew not to trust another Hollywood heartthrob with a reputation like his. He was my boss and became my ruin. I should have stayed far away from him. Ben Lawson promised me the world. He even promised me his heart.

But he destroyed everything–my heart, my career, us.

Reed Scott is the hottest actor in LA…
Being a Hollywood heartthrob has its perks, and I’ve damn sure enjoyed every one of them, both on and off the silver screen. The tabloids loved every second of exploiting my privacy, chronicling my mistakes in ink for the whole world to see. Accepting the lead role in a romantic dance film was guaranteed to make me a box office hit and help me rewrite my image, until the choreographer hired to train me turned out to be the only woman I’d ever loved and lost.

As beautiful and enticing as ever, Teagan walks in and reminds me of the worst mistake I’ve ever made. She should hate me, and now she has the power to destroy everything I am.

Teagan Reynolds is picking up the pieces…
Fool me once, shame on you. Fool me twice…never going to happen. I fell in love with Reed Scott once and it nearly killed me–literally. The last thing I want to do now is teach him how to dance, but I need this job and there’s no way I’m letting him take yet another thing away from me.

Reed is in my world now, and this time we’re dancing by my rules.

Grant Mercer is on the run from his secrets…
This was supposed to be an easy assignment—travel halfway across the globe and compose the musical score for an upcoming Hollywood movie by one of the biggest production companies in Los Angeles. One and done like dozens of times before. I wasn’t supposed to have my entire life crumble around me the moment my plane took off. I wasn’t supposed to meet her.

Intriguing and covered in ink, Simone enters my life like a storm, leaving only heartbreak in her wake. I should keep my distance. Hell, she should keep hers. Instead, we did the exact opposite.

Simone Reynolds is mending a broken heart…
Just months after finaling in one of television’s most watched singing competitions, I should be riding the high of my life. I should be celebrating starring in a musical film predicted to rock the box office. It’s hard to bask in my success when my family is suffering a loss we never saw coming. And then there’s Grant—brooding and rugged and an absolute pain in my ass as he messes with my movie.

He’s as broken as I am, but the perfect harmony is only a leap of faith away. 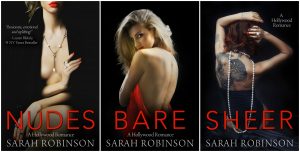 Buy your copy of the Exposed boxed set today!

Aside from being a Top 10 Barnes & Noble and Amazon Bestseller, Sarah Robinson is a native of the Washington, DC area and has both her Bachelors and Masters Degrees in forensic and clinical psychology. She is newly married to a wonderful man who is just as much of an animal rescue enthusiasts as she is. Together, they own a zoo of rescues including everything from mammals to reptiles to marsupials, as well as volunteering and fostering for multiple animal shelters.

Visit the author's website for more information about Sarah and her books: http://booksbysarahrobinson.net/