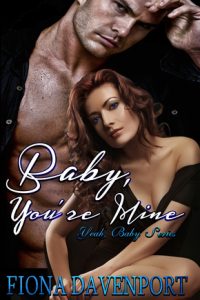 Guy Rule #1: Sisters Are Off Limits

Bailey Cross grew up as the only daughter of a single mom. When she finds out about a family she never knew she had, she travels half-way across the country to meet them. On the night Bailey hits town, her nerves get the better of her, making her act out of character when she meets Wyatt Kincaid in a bar and lets him take her home. After a night that rocks her world, she races out of his bed as quickly as she fell into it. But, there is one thing Bailey can’t run from, the baby she and Wyatt created.

Wyatt went out looking for a good time and found a hell of a lot more than he’d bargained for. He wants more than a one night stand with the woman in his bed; he wants a chance at forever. But when he wakes up the next morning, she’s gone. He searches for her, but Bailey is nowhere to be found… until he goes looking in his best friend’s home.

Baby, You’re Mine is the first book I’ve read written by Fiona Davenport. Some of my friends are addicted to ‘Oops, pregnancy books’, so when I read the blurb from Baby, You’re Mine I knew I had to give this author and novella a chance. I’m glad I did, it’s a quick, sweet and steamy read.

“I wrapped my arms around her and held on. There was one thing she wouldn’t be able to get me to do. Let her go. I gently squeezed her and a sweet little sigh fell from her lips. “I think I’ll keep you.”

Wyatt Kincaid is a hard working man and popular with the ladies. When he goes out for drinks with his best friend Jack one night, he meets Bailey – a woman opposite from his normal choice. But from the moment he hears her voice, he needs to get to know her, and becomes instant-possessive. After they have shared a passionate night, to his utter disbelieve Bailey has disappeared without a trace..

Bailey Cross is in town to meet her father and his family. At her mother’s deathbed she has learned who her father is, and curious as she is, she wants to get to know the man she shares her genes with. Meeting and falling for a stranger, let alone getting pregnant by him isn’t what she has in mind for her future, but being raised by her single mother she wants to give Wyatt a chance.

“That voice. It couldn’t be. I stood up from the couch and swiveled my head to find him standing in the doorway staring at me with heated eyes, a bouquet of blue and burnt orange colored flowers in his hands. Jack’s best friend was Wyatt.”

From the moment they meet, everything between Wyatt and Bailey goes at record speed. They have a mutual, instant attraction and don’t even try to fight it. When Wyatt finds out their night of passion has resulted in a pregnancy, his inner, over-the-top Alpha kicks in, all he wants is to take care of Bailey and marry her before the baby is born. Bailey is a lot more realistic. She does want a relationship with Wyatt – not just because he’s her baby daddy – but she wants to take it slowly.

Baby, You’re Mine is a sweet, sexy and over-the-top read. I really liked Wyatt and Bailey. Although Wyatt is a bit of a steamroll, Bailey stands her ground and doesn’t give into Wyatt without a fight. Besides getting to know Wyatt, Bailey is still forming a bond with her father, half-brother and stepmother. Even though they’ve known her for a short time, they are protective of her and aren’t on the Wyatt/Bailey wagon right away.

“Wyatt, I’m not going to marry you just because I’m pregnant.” Obviously, I needed to work a little harder to convince her that while the baby was helpful in my desire to move things along quickly, we would have ended up man and wife no matter what. The moment I saw her, she was mine and I was hers.”

I’ve enjoyed reading this sweet, quick book. Because of the predictability and the length I give this story 3.5 stars.

~~ Baby, You’re Mine was provided in exchange for an honest review ~~