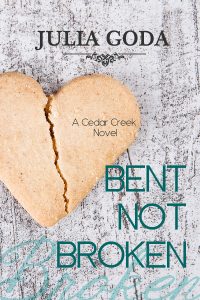 Life has taught Ivey Jones early on that with trust come pain and betrayal. Out of survival she has created walls around her to keep anyone from getting too close. Though she lives in her dream house in the Rocky Mountains and loves being the owner of the town's quirky little bookstore Serendipity, her life is narrow and governed by strict rules that she never deviates from…until Cal Bennett enters her life.

For the past nine years Calvin “Cal” Bennett has stayed away from Ivey, thinking she deserved better than to be saddled with a single dad who has never been good at relationships. Until a few chance encounters show him what he’s been missing and he can’t stay away any longer.
Little does he know he’s got a fight on his hands that he might not be equipped to win. Shadows from Ivey's past lurk in the dark, ready to strike and bring her low once and for all. But Cal swears he will do whatever it takes to break through that wall of steel to win Ivey’s heart and keep her safe.

The story is about a woman, Ivey, with a terrible past. Her parents had a violent marriage, in which she was a victim as well. After fleeing a violent relationship she moves to the other side of the country and closes herself off to romantic relationships.

Cal lives in the place where Ivey relocates. He is a single dad with enough worries on his shoulders. He wants Ivey, but he doesn’t want to bother her with his problems. But after nine years on the side lines, Cal is done and makes his move.

My thoughts:
I love Ivey. Despite her past she has mostly what she wants. Her own bookstore, a beautiful house and friendly people around her but no romance. Relationships she has are on her own terms. Sex yes, but no feelings, no dinners, no evenings out.

Cal comes to Ivey’s bookstore often because his 11-year-old son Tommy loves to read. After Cal has decided it’s time for something, a real relationship, with Ivey there’s nothing that can stop him. Of course, he has some help from Tommy…

Is Julia’s style in Bent Not Broken similar to KA? Yes. However I absolutely don’t mind. I love the way it’s written, in my mind I see the town of Cedar Creek and the people who live there. I will definitely buy Julia’s next book!