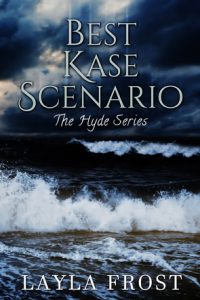 Quick with a smile and joke, people assume Kase Teo is all ego with a slacker follow-through. But lurking behind his hauntingly beautiful blue eyes is an ocean. Knowledge, quick wit, experience, pain… There are depths to Kase that most don’t see. If there’s one thing he’s learned, it’s that life’s all about appreciating the beauty.
For Kase, that means going after the redhead that’s set up residence in his mind. And his fantasies.

Now he needs her to see life’s more than just a best case scenario.

***Warning: This book is intended for adults. It contains frequent adult language and situations.

Best Kase Scenario is my first book written by Layla Frost. Given the blurb, I had my expectations, but this book turned out different, in a very positive way. I like the author’s writing style and the choices she makes for her characters.

“Balls. I was in trouble. Speeding in my piece of shit car, I checked the clock. I was dangerously close to being late. Maybe this is the universe trying to tell me something. I hesitated for a second, easing my foot off the accelerator before pressing down again. My poor car lurched forward, squeaking its protest. I may not have wanted the job, but I needed it.”

Harlow Cooper is a stubborn, over-worked young lady. Dividing all of her time between studies, an internship, family, friends, and her secret job, only a couple of hours are left for sleeping. But admitting all of this is becoming too much isn’t something Harlow wants to do, keep on going is the only way, or so she thinks. Because of her crazy schedule, Harlow doesn’t have the time to date, but she does have a secret crush on a good friend/employee of her best friend’s fiancé—Kase. She hates that, of all people, he finds out about her secret job, causing them to ‘argue’ a lot. But no matter how much she tries, she can’t fight the feelings she has for Kase.

“It was a miracle I hadn’t walked right into a wall. The first time I’d gotten the chin lift, I’d taken it as him declaring his undying love and inviting me to spend the rest of my life getting lost in his eyes. After the millionth time, I realized it was his polite acknowledgment of Piper’s weirdo friend.”

Kase Teo is a busy artist, working in the garage of his friend. He’s a friendly, easy-going guy who can be very scary when needed. After some problems in his late teens, he’s leading the normal life of an average twenty-something man; working, hanging out with friends, and the occasional hook-up. For the last few months though, a certain redhead, has been constantly in his mind. Knowing her and her friends, Kase knows Harlow isn’t hookup material, but the kind of girl you start something real with. Convincing Harlow that he is actually serious turns out way harder than he has anticipated, but he enjoys the chase.

“Harlow. Smart. Funny. Sexy as hell. The bane of my mother fucking existence. Months she’d been torturing me. Months I’d spent wanting her. I was a grown ass man with a fuckin’ crush, on the verge of passing her a note to ask if she liked me too. I’d even started hanging out in the hallway at Hyde to accidentally see her when she visited Pipe.”

Harlow and Kase are a well-matched couple full of funny banter. Harlow is stubborn and strong-willed, and doesn’t want to listen to Kase, even though it’s in her best interest at times. She gives Kase a hard time, but despite all of that, he doesn’t lose interest in her. As soon as Harlow gives into her feelings and decides to give Kase a fair chance, it’s obvious they belong together. The problems this couple has to conquer aren’t caused by crazy exes or terrible misunderstandings between the two of them, but by circumstances beyond their control.

Although I haven’t read the first book in the ‘Hyde series’, I didn’t feel like I was missing important information. However, reading this book peeked my interest and I will pick up Hyde and Seek in the very near future. Besides the banter between the main couple, I love Harlow’s interactions with her little sister and mother. I also hope some other characters will get their own story, what little about them is being given in this book calls for more.

“Marry me, ipo?” I repeated, making it a question. “Let me give you lani. Make your life moeʻuhane.” She nodded, her face turning red as she blinked back tears. “But it already is.”

~~ Best Kase Scenario was provided in exchange for an honest review ~~