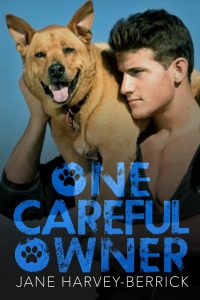 WARNING!
This book will break your heart!

From the best-selling romance author of THE EDUCATION OF SEBASTIAN comes a sexy, heart-breaking and heart-warming story about one man and his dog. (Standalone)

Alex is lost and alone, with only his dog, Stan for company. He doesn’t expect kindness from anyone anymore, but sometimes hope can be found in the most unlikely places. He has a second chance at happiness, but there’s a dark side to Alex, and a reason that more than one person has called him crazy.

Single mother Dawn is doing just fine. Except that her ex- is a pain in the a**, her sister isn’t speaking to her, and her love life is on the endangered list.

At least her job as a veterinarian is going well. Until a crazy-looking guy arrives at her office accompanied by an aging dog with toothache. Or maybe Alex Winters isn’t so crazy after all, just … different.

Dawn realizes that she’s treated him the same way that all the gossips in town have treated her—people can be very cruel.

“My heart ached for the boss. He needed more in his life than a beaten up ole hound dog, but I was all he had.”

Dawn is working as a veterinarian in a small town and lives with her eight-year-old daughter Katie. The relationship with Katie’s father ended in a complete disaster, leaving Dawn a bit scared to start dating again. And besides that, she’s busy enough with her life as it is; Katie, her work and her friends take a lot of her time. The moment the new town recluse Alex comes into the clinic with his dog Stan, Dawn senses there is more to the silent man then she can see.

“I dreamed about him that night. Totally inappropriate dreams for a respectable single mother who rarely dated and whose eight year-old daughter was sleeping in the next room.”

Alex has it all; a good marriage, a successful company, everything. Until he hasn’t. Alex doesn’t handle the aftermath very well and just breaks down. After that, he leaves the city with just his beloved dog Stan to start a new, solitary life in a quiet town, away from everything. But aging Stan needs to see the town vet, and the vet turns out to be an attractive woman. Slowly, Alex warms up to her and her young daughter and starts to become human again.

“Dawn, I haven’t dated anyone in a long while.” I gazed at him skeptically. “Really? Why?” He looked away. “Coming here has been… a fresh s-start for me.” “You don’t like to talk about your past.” “Neither do you,”

Both Dawn and Alex are damaged by previous relationships. They both got burned badly, leaving them skittish to open their heart for love again. Dawn sees past the silence and rugged appearance of Alex, and treats him like a normal human while the other townspeople see him as a danger. Dawn and Alex dance around each other for a bit, but they can’t deny the attraction between them. The road to their Happily Ever After is a rocky one; secrets and misunderstandings create some angst-y moments.

One Careful Owner is written in the way I enjoy the author’s work for; realistic people in realistic situations. I understand Dawn’s hesitation to bring Alex into the life of her daughter, especially after she finds out his ‘secret activities’. It’s not just her life, she also has to think about Katie and what it will do to her. I love Dawn and Alex together; they are sweet and normal together, and Alex is a wee bit dirty in the bedroom. At the beginning of the book, Dawn’s sister Stella was a nasty piece of work. I love how she turned around, and that she and Dawn where able to be real sisters again. And Stan.. This is probably the first book I’ve read where an animal has his own POV, I liked his inner thoughts.

“I’ll love you harder than anyone else ever could. I’ll protect you and I’ll give you everything I have. I’ll be the man I need to be for you and for Katie.” “I know. Because I love you, too.”

I’ve enjoyed reading One Careful Owner, I give the story of Dawn and Alex 4.5 star. 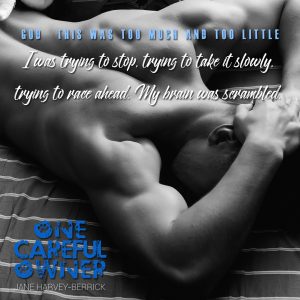 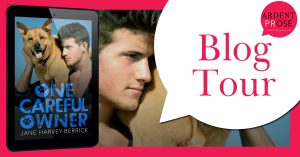