Sometimes your life is split by a single decision.

I’ve spent every day of the last seven years regretting mine: he left, and I didn’t follow. A thousand letters went unanswered, my words like petals in the wind, spinning away into nothing, taking me with them.

But now he’s back.

I barely recognize the man he’s become, but I can still see a glimmer of the boy who asked me to be his forever, the boy I walked away from when I was young and afraid.

Maybe if he’d come home under better circumstances, he could speak to me without anger in his voice. Maybe if I’d said yes all those years ago, he’d look at me without the weight of rejection in his eyes. Maybe if things were different, we would have had a chance.

One regretted decision sent him away. One painful journey brought him back to me. I only wish I could keep him.

“I couldn’t take everyone’s pain like I had so willingly. I couldn’t give any more because I had nothing left.”

Elliot is a sweet young woman, who does everything she can for the people she cares about. She doesn’t know what to do with her life after her studies, so she lives with her sister and brother-in-law, taking care of their children. In her late teens, Elliot fell deeply in love with her best friend’s older brother, but her father forces her to break off the engagement. Even though it’s seven years ago, Elliot still misses and loves Wade.

“Wade. He was home, appearing at the edge of my universe after what felt like a thousand years without him. Changed was the word that circled my thoughts. Hardened, colder. The boy I knew was gone. No, not gone —he was there, somewhere. But I couldn’t see him; I could only see what he’d become.”

Wade is a hardened soldier, the horror of war made sure of that. Right after school Wade enlists in the army for personal reasons, wanting to fight the ideology that caused 9/11. Although he was young, Wade loved Elliot with all his heart. Her breaking off their short engagement breaks something in him. By the time he is ready to face the letters she has written him after she left, he’s sure she deserves a better man then him. When Wade returns home after seven years to spend time with his ill father, he also sees Elliot again. He doesn’t want to, but he still loves her.

“The vision of her when I’d last seen her was a part of me, a part of my mind and soul. I could still hear her say goodbye, still feel her slipping away from me. Although she was older, she was otherwise unchanged. Smaller, maybe. Quieter. But she was still so beautiful, her eyes so dark. Bottomless. Infinite.”

Though Elliot and Wade were very young when they fell in love, it was a real love and they were planning a future. Sadly, Elliot’s father didn’t agree with their plans and forced Elliot to make an impossible decision. Both Wade and Elliot are still hurting over the past events, and now they see each other for the first time in seven years, not under the best of circumstances. It’s very clear from the beginning they still have feelings for the other, but each has their reasons not to share that. Wade and Elliot are a sweet couple who deserve love and happiness, and I’m glad they get that.

A Thousand Letters is an emotional second-chance story. I love Elliot and Wade, they are both realistic people who are hurt in the past, not just by losing each other. I feel sorry for Elliot, she’s always giving, and her family does nothing but taking. She doesn’t deserve their cold treatment and their crazy demands. I would have walked away a long time ago, but that’s not in Elliot’s nature. I love that she found her own family, with Wade and his siblings.

“So many years I’d missed. So many kisses, so many words from her sweet lips. How happy we could have been all that time —my chest burned at the thought. But I was through looking back to the past when my future was right in front of me, right there in my arms.”

I love A Thousand Letters, I give this emotional story 4.5 stars. 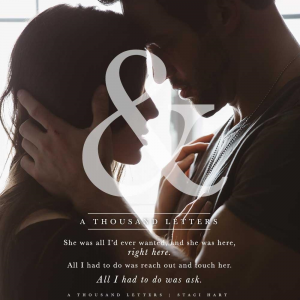 One Response to “Book review: A Thousand Letters ~ Staci Hart”