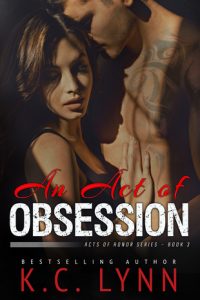 She’s beautiful yet scarred beyond repair.

He’s powerful and lethal, in and out of the ring.

One act of kindness brought Sophie Parish far more danger than she could have ever imagined. Now she’s on the run, leaving behind her family and the only dream she’s ever had.

Retired EFC fighter Kolan Slade’s life has been one endless battle after another. He has a dark past with an even darker desire—the only one he’s ever known.

Until he meets Sophie.

Intrigued by her raw beauty and the secrets she’s trying to hide, Kolan craves to know who she is and what she’s running from.

Protecting her becomes his obsession and he’ll sacrifice it all to save her. But in the end her love will have him questioning himself and everything he thought he knew.

“I ran. I left behind my family, my dreams, and my identity. I was no longer Sophie Parish, the girl who loved life and had a dream to dance forever. I’m now Lia Kay—scarred beyond repair and fearful everything.”

Sophie is a lonely young woman on the run. One sweet act of kindness as a teenager has caused her nothing but misery, making her think she has to leave all of her loved ones behind. Or at least until the source of her nightmares is caught and can’t harm her and her family anymore. While on the run Sophie tries not to form friendships, let alone relationships; she doesn’t want people she cares about to get hurt by the dark past following her. But for some reason Sophie feels safe in Sunset Bay, she likes her job and – although they make her a bit nervous – the people she’s working with. From the moment she meets Kolan she feels very attracted to him, but she knows she can’t have him.

“When my eyes meet his, my cheeks burn with embarrassment, as I realize he’s watching me openly ogle him. His expression now amused. Good god, Sophie, get a hold of yourself.”

Kolan is going through a rough period; a false accusation of rape has made him stop his fighting career and giving up on the BDSM life-style he was involved in. Living in the same town as his younger sister is good for Kolan, slowly he starts to become himself again. Working at the gym with youngsters and grownups gives him purpose, a reason to get out of bed every morning. Meeting Sophie at the gym awakens some unwanted feelings in Kolan. He knows he’s no good for sweet, scared and innocent Sophie, but he can’t stay away from her for long.

“Nothing scares me.” It’s a complete lie. She scares the hell out of me. A heavy silence descends upon us, her pretty eyes wide and fearful. “What are you so afraid of?” I ask. Her breath hitches, emotion shining bright in her gaze. “Everything.”

Sophie and Kolan both feel very attracted to each other, but each has their reasons for trying to keep the developing relation casual. Kolan feels his darker longings are too much for the fearful girl he’s falling for, and keeps telling her he’s not a good man. Sophie, scarred inside and outside by her past, tries to keep Kolan at a distance, not because she doesn’t want to be with him, but because she wants to protect him. But since this being a romance book, the couple gives into their feelings; together they’re sweet and their sexy-times have a little edge.

An Act of Obsession is the first book in ‘The Acts of Honor Series’ I’ve read, and I enjoyed it. The book is said to be a standalone, but I felt I was missing some background information on the characters, especially on Kolan. I know this is a fictional book, but in my opinion he stayed away from the BDSM scene to easy; given the number of times it was mentioned I expected something more I guess. I like the author’s writing style, and I loved how Kolan was with Sophie; very gentle with a little dominant edge. One of the side characters, ten-year-old Benny was hilarious; a true mini-alpha in the making.

“I drop my forehead on hers, my breathing harsh from the emotions threatening to suffocate me. “Be sure, Sophie. Because if you stay, then you better know now I’m never letting you go.”

I’ve enjoyed reading this sweet story, I give An Act of Obsession 4 stars. 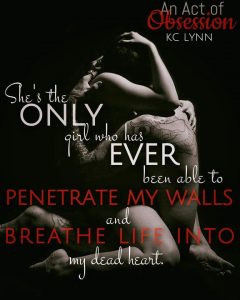