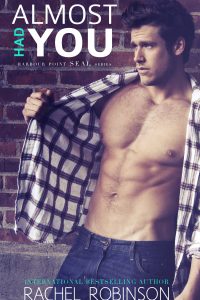 Clover
I’ve always had a knack for following the rules. As a southern mayor’s daughter, I carry my straight-laced reputation like an Academy Award. There was never a need to question my place under the sun. It glitters. It’s splendid. I am blessed.
From the second Mercer Ballentine, war hero, Navy SEAL extraordinaire stepped off the airplane, my life has been nothing but one hijinks after another. Nothing will ever be the same.
It’s a good thing I’m ready for a change, because that man has tilted my world upside down. He might brandish roguish cowboy charm and rippling abs, but those things are no match for the wiles of a true southern belle.
I always get what I want and I don’t want to follow anybody’s rules for another second.

Mercer
Alabama. Home. A three-week furlough. Fighting a war that seems will never end is wearing me down and I’ve never needed a vacation more. My plans to unwind, drink myself numb, and catch up with my friends are thwarted by a taffeta covered pageant queen who is nothing like what she seems. My daddy is running against hers this election and the stakes have never been higher. I’m heading back to war.
I don’t need attachments. I don’t need drama. I definitely don’t need to save this woman.
Then again, I always want the things I don’t need, and you’ve never seen Clover Wellsley—there’s a madness to her beauty.
I need to make her mine.
If she’ll let me.

A rugged Navy SEAL who has seen it all and a Southern Bell with a mind of her own… They have very different lives, but maybe they’re exactly what the other one needs. Almost Had You it about Mercer and Clover, who have grown up in the same town and think they know each other… I’ve enjoyed their story very much.

Clover is a true Southern girl who does as her parents tell her, even though she’s a grown-up lady. However, that doesn’t stop her from having dreams of her own, dreams about her future. Mercer is oh so different from what her parents want for her, and Clover just can’t stay away from him. Mercer is a Navy Seal and back home for a short vacation. It is supposed to be relaxed and fun, but he soon realizes Clover is a lot more then just fun. Feelings are everywhere, and Clover and Mercer decide to give their love a try.

Clover and Mercer are great people; both work hard and try to make a difference in the world. Clover seems like a good, obedient woman, but there’s a lot more to her. I love that she makes her own plans and doesn’t give into her parents demands. Mercer is a great guy too, and he deserves a break from all the horror he has seen. Clover and Mercer know each other since childhood, and it’s fun to see them reconnect as adults. And getting to know each other, because you have ‘knowing’ and ‘knowing’. I love Clover and Mercer; they really are a great match.

Almost Had You is part of the ‘Harbour Point SEAL Series’ and technically a standalone story. It’s about Mercer and Clover of course, but also very much about the ongoing war against terrorism. The parts about the war are dark, but Mercer and Clover storyline is light and sweet (with some drama, otherwise it would be too sweet). I have enjoyed Almost Had You very much, I can’t wait for the other books in the series. 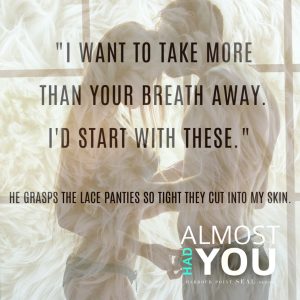