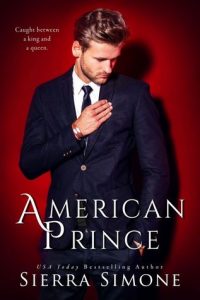 I’ve been many things.

I’ve been a son and a stepbrother. An Army captain and a Vice President.

But only with Him am I a prince. His little prince.

Only with Maxen and Greer does my world make sense, only between them can I find peace from the demons that haunt me. But men like me aren’t made to be happy. We don’t deserve it. And I should have known a love as sharp as ours could cut both ways.

My name is Embry Moore and I serve at the pleasure of the President of the United States…for now.

This is the story of an American Prince.

American Prince is the second book in ‘the American Queen Trilogy’ by Sierra Simone. The first book is told from Greer’s POV, now we’re introduced to Embry Moore; Vice-President of the United States and former soldier. Through his eyes, we get a much closer look at the history he and Ash share, and what Greer means to him.

“I was ruined for loving anyone else, and call it fate or bad luck or genetic compatibility or psychological trauma—whatever it was, I was bound to them like rust to metal, a collision of particles and forces that changed us all irrevocably. There was no going back.”

Embry Moore has grown up in a privileged family. He didn’t have to worry about anything and lived the life of spoiled brat; parties, women and everything he wants. Enlisting in the Army and facing the horrors of the battlefield however alters his view on life. Embry loves women (and women love him), but meeting a fellow soldier – Maxen ‘Ash’ Colchester – changes everything. Nowadays, Embry is the Vice-President of the United States and devoted to his President – Ash – and Greer, the woman they both love. While the outside world thinks Embry is still a wild playboy, he, Ash and Greer know better.

“You will be grateful for my kisses, won’t you?” he demanded, nipping at my jaw. “You won’t leave me and never come back?” In twenty-two years, no one, no one, had ever made me feel like this. Not just claimed, but like that claim was literally staked into my flesh, anchored to my bone.”

Greer and Ash are America’s most popular couple. Ash is the President who lost his first wife to cancer and Greer is his new bride, his new love. But in the safety of their own quarters they share their life and bed with Embry. After the ending of the previous book Greer is still not to her old self. Yes, she’s rescued, but she doesn’t know what to do with her feelings. She’s sure of her feelings for her men, but the past Ash and Embry share makes her a bit insecure at times. To the eye Ash is in full control, but he feels he’s failing his queen and little prince. Keeping up appearances for the world is getting harder and harder.

“Ash wanted me. Greer wanted me. And they wanted to open their hours-old marriage to me—imperfect, awful me. I should have said no. For their sakes, for the sake of my soul. But I couldn’t. I just wanted it—wanted them—too fucking much.”

Ash, Greer and Embry… The three of them are complicated, and that’s an understatement. Yes, they love each other, but being together like they really want is impossible. Would they have lived in a rural area as nobodies, they might have a chance. But the three of them are basically American Royalty, watched by the world, by fans and enemies. Since American Prince gives a huge inside in the past of Embry and Ash, I can’t shake the feeling Greer is a bit of the third wheel. Yes, they love her, but it almost seems they can do without her. I don’t like that feeling… Also, the constant shifting from past to present and back was a bit too much for me. I wanted to see more of Embry, Greer and Ash in the present.

“I will break from loving him, I think. I will split with it, burn with it. And yet, for the first time, I know what I have to do.”

I’ve enjoyed reading American Prince, and some parts really break my heart. I give the second part of the Trilogy 4 stars. I can’t wait for American King, to finally get to know the real Ash. And after the ending? I need the next book as soon as possible…

In an instant, he was on me, straddling my thighs, one hand yanking my head back so I had to look up into his face.  “Don’t play games with me,” Ash warned in a low voice.  “Not tonight.  Not after what you did.  You don’t even want to know the things I’m thinking about right now.”

I could barely breathe.  Pain sang out from my shoulder and hunger sang out from my thickening cock.  I was at the mercy of a monster—in the hands of an angry god, as they say—and I’d never felt more alive.  It was like kissing his boot, like that first moment I’d been shot at in the trees—the whole world came to life, the forest thrumming and the leaves rustling and my blood and heart all part of this incredible symphony of magic and music that was playing all the time, if only I had the ears to listen.  Being with Ash was like my battle high, the fragility of life so apparent, the thrill of surviving it so exhilarating.  Surviving him.

“Take it,” I said, my fantasies from all those years ago coming back and making me stir underneath him.

“What?” he asked quietly.

His lips parted, his eyes hooded, and he pulled my head back even more, exposing my throat. “And what exactly do you owe me?” he asked.  “What exactly do I deserve?”

I met his eyes, which were almost black in the dark.  “Whatever you want.”

“What I want will have you flat on the ground with tears in your eyes.  You think you want to give that to me?”

“Oh, that’s what you want, is it?” he breathed.  He leaned in, his thighs on my throbbing erection, and I felt his own, an iron bulge pressing into my stomach.  It was massive.  He’d tear me apart with it.  “You won’t let me have you any other time, not with kisses or love letters, but when you’re bleeding and I’m furious, that’s when you’ll open yourself to me?  That’s when I get to have this?”

How could I make him understand?  That it had to be like this?  That I had to be conquered, not wooed?