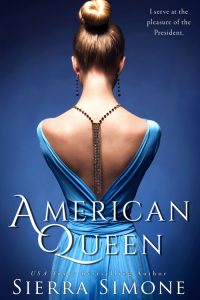 My name is Greer Galloway, and I serve at the pleasure of the President of the United States.

This is the story of an American Queen.

“This is real life, Greer. Say no. Say no to Embry, and for God’s sake, say no to the President. I breathe in. Fire and leather. Blood and kisses. I breathe out. “I’ll see him. Tell him I’ll see him.”

Greer Galloway is no stranger to the political world. As the granddaughter of a former vice-president she grew up right in the middle of political Washington DC, being her grandfather’s unsuspected little spy. Nowadays Greer works as a Professor in Literature at Georgetown University, at job she has studied hard for, a job she deserves. Having spent so much time in the study books Greer doesn’t have much experience with dating and men, but she isn’t completely innocent. Seeing Embrey after ten years steers up old feelings and opens old wounds. His question, or better Ash’s demand, changes everything.

“I’ll take care of you, Greer. You don’t have to be afraid of me.” Oh, but I am. And not a little bit afraid of myself.”

Maxen ‘Ash’ Colchester and Embry Moore have been through hell as young soldiers. After their military careers, the men went into politics, and not unsuccessful. Ash is the youngest elected president in the American history, Embry is his vice-president. Ash is a dominant Alpha, sure in his ways; knows what he wants and how to get it. Embry is a ladies man, popular with the women and never short of a beautiful date. Both men are important to Greer, both men hold a piece of her hart.

“There’s too many thoughts, too many questions, all contradicting each other, all fighting each other. I’m aroused. I’m angry. I’m curious. I’m betrayed. I don’t ever want this moment to stop.”

Greer has known Ash and Embry for a long time. Unknowingly to them, throughout the years the men have played a role in Greer’s life, have shaped her dreams and desires. When Greer sees Embry after so long she’s full of questions, his request doesn’t make it easier. Seeing her teenage crush Ash again is just as confusing. While Greer spends time with Ash, Embry is never far away. Slowly, Greer and Ash settle in a relationship, in which Ash’s dominant side takes control. The men confuse Greer, she has had feelings for both in the past, and her heart tells her the feelings for both men are still there. Can it be that easy, does Greer even have to choose?

As already said, American Queen is the first book in Sierra Simon’s new trilogy. When I read the synopsis, I knew I had to read this book, and I can say it’s much more than I expected. Alternating from past to present and vice versa the connections between Greer, Ash and Embry are told, all from Greer’s point of view. You see Greer as a young girl meeting the mysterious Merlin, who later becomes Ash’s most important advisor. You see Greer when she meets Ash and Embry, and what they mean to her. I love how all comes together in the final part of the book; it’s explosive, erotic and very steamy.

One little rant; I only found out I was reading the first book of a trilogy when I was half way through American Queen. I love a good trilogy, but I would like to know up front.

I’ve enjoyed reading American Queen, and I can’t wait for the next book, American Prince. I give the first part of the trilogy 4 stars. 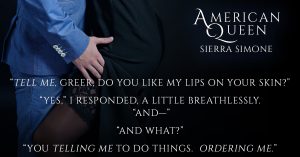