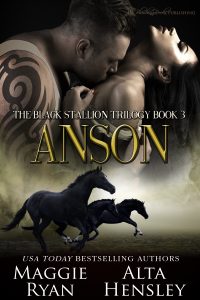 Anson Steele, along with his two brothers and father, lives by one code: Help all in need. Even if it means saving those who walk among the most sinister criminals in the world. Known as The Black Stallions, their mission is simple – provide rescue and safety to the innocents drawn into the evil depths of the underground.

Natalia Alvarez has been sold to the leader of one of Argentinian’s largest drug cartels at an underground human auction. Being sold to the highest bidder, she is now nothing more than a possession of Juan Montez and hidden away deep within the walls of his South American compound.

Anson Steele has been on the hunt for Natalia since the day he first saw her at the auction and helplessly had to watch her while not being able to do a thing about it. But he has made it is life’s mission to find this woman and pull her out of the depths of hell at whatever cost. She will be his save one way or another.

With the backdrop of the mission being the unforgiving jungles and the dangerous streets of Argentina, and escaping a foreign country near impossible, is Natalia doomed to be locked away forever?

While fighting against a powerful drug cartel and their ruthless leader, will Anson Steele be able to rescue Natalia before it is too late? Will they both be able to find refuse in The Black Stallion Ranch and put this awful nightmare behind them?

Anson in the third and last book in ‘the Black Stallion Trilogy’ by Maggie Ryan and Alta Hensley, and tells the story of the remaining brother, Anson. Given the two previous books in the series I had a few ideas about Anson, Natalia and their story, but the authors surprised me. I like it!

The moment Anson sees Natalia on the slave auction in Russia he is sold. He knows he can’t rescue her that very moment, but he vows he will safe her when he can. Like his adopted brothers and father Anson is a guy who fights for what’s right, and who can’t stand the abuse of the innocent. When Anson finally can leave for Natalia’s rescue mission he’s in for a big surprise… Natalia doesn’t react how he thought she would have…

“As his inner eye traveled across roads, forded rivers, and climbed mountains, he knew that, while he didn’t know exactly how he planned to get Natalia out, he’d not leave unless she was by his side.”

Natalia lived a happy childhood in Argentina, until all ended in death and bloodshed. Natalia was devastated, but her promise to her grandmother kept her going for years; revenge. But revenge seems far away with her current situation; being sold as a slave to a notorious crime lord has weakened her body, but her mind is still working. When Anson comes for her rescue she doesn’t know what to make of him. Yes, he’s attractive, but he was also at her auction. Can she believe him or is he just another cruel man who preys on the weak?

“His eyes held hers, even as their bodies moved. Chest to chest, she could feel the beat of his heart. Body to body, she could feel his warmth. So close, so intimate, yet so very distant.”

Anson thinks of Natalia as his the moment he lays his eyes on her, and goes above and beyond to save her from her ‘owner’. As soon as Natalia realizes Anson is the good guy who won’t hurt her and save her, she allows herself to really look at him. Despite the messy situation they’re in, the couple can’t fight the attraction between them and have some sweet and sexy moments while traveling to safety.

Anson didn’t go as I thought it would go… More specifically; I thought Natalia would be a sweet damsel in distress, miserable and waiting to be rescued. Yes, she is miserable (who wouldn’t be when being the slave of a cruel man), but she is no weak woman at all. She knows what’s going on, and is very capable to do some serious damage herself. I like this feisty chick. Just as his brothers, Anson has a bit of a dominant side, but it’s kept to a minimum throughout the story. To be honest, I expected a bit more from him in this department…

“I promise that not a second will go by that you don’t know how very much I love you. You came for me, Anson… you saved me.” “No… mi amor, we saved each other.”

I’ve enjoyed reading Anson. I give the conclusion to ‘the Black Stallion Trilogy’ 4 stars.