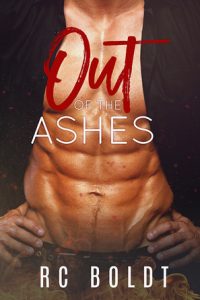 Phoenix /fēniks/: (in classical mythology) a unique bird inhabiting the Arabian Desert that burned itself on a funeral pyre before rising from the ashes with renewed youth to live through another cycle.

This isn’t mythology, it’s war, and Hendy is left in the hands of Hell’s cruelest gatekeepers.

His team is killed before his very eyes, and despite his efforts to save them, he’s captured and subjected to merciless torture—losing virtually every piece of his identity but his pulse.

After his rescue, he returns home from Afghanistan, saddled with facing the daunting task of healing his physical scars as well as the invisible ones—his emotional demons.

Dr. Presley Cole isn’t one to shy away from a challenge. Embarking on a new journey, she makes it her mission to prove to Hendy that his life isn’t over; that he’s worthy of love.

Because sometimes even a phoenix needs help to rise…

Out of the Ashes.

Out of the Ashes is the latest book by RC Boldt. It’s a standalone story, but the characters from previous books by the author play a part in this book. In Out of Love, Hendy went missing, his faith unknown. I knew RC Boldt wouldn’t let a man go missing like that, and I’m glad she gives us his story. I love Hendy and Presley.

“Because you make me feel everything.”

Hendy is a changed man. Being kept captive and tortured for almost two years by ISIS in Afghanistan does that to a man. The old Hendy was a SEAL to the bone and a womanizer. Not that he had to chase them, women came to him for a good time and he delivered. But his ordeal in Afghanistan has left its marks on him, both physically as mentally. The scars covering parts of his face and body are doing a number on his confidence, and his body is still hurting. His friends want him to do better, and set up an appointment with a chiropractor. She nothing like the women he normally went for, but Hendy is immediately attracted to Presley.

“But you’d, maybe, be okay with…” she trails off as if to get the nerve to finish with, “dirty talk and maybe some gentle bondage, though? Would most guys be okay doing that to a woman?” Fuck. Me. Right here. Please.”

Presley works as a chiropractor and naturopathic doctor and owns her own practice. She loves her work, and to help her patients to achieve a healthy and positive life. Her own love life is a bit less positive. She and her fiancé are drifting apart, but she can’t pinpoint what’s exactly going on. All she knows is she wants more than he gives her. Meeting Hendy in her practice opens Presley’s eyes, and she finally has the long coming talk with her lousy guy. Hendy is there to help her deal with the aftermath, it doesn’t take long before she starts to fall for him.

“Hendy called me Pres. He gave me a nickname. And everyone knows nicknames mean something. A term of endearment. Which means I’m a tiny bit closer to showing him—proving to him—that he’s much more than looks alone. So much more.”

Presley and Hendy meet as chiropractor and patient, but that doesn’t stop them feeling attracted to each other. Presley however is engaged, so nothing happens between her and Hendy, they’re just being friendly. The minute the fiancé is out of the picture, Hendy makes his move and Presley doesn’t say no. Although they are very different persons, both feel something with the other they never felt before. And the sex? It’s hot and sweet at the same time. But a good love story isn’t complete with some struggle, and boy do they have to.

Hendy and Presley’s story is much more than just a love story. It’s about coming to terms with your new reality, your former life gone. Hendy might be back home, starting a new life with a good woman, but the aftermath of his captivity isn’t easily overcome. Before he and Presley have a real chance, Hendy needs to be at peace with himself and accept his new reality. I love Hendy and Presley together. Presley is a confident woman, but when it comes to sex she’s a bit inexperienced. I love how Hendy reacts and handles it. I’ve read a few books by this author already, but the writing in Out of the Ashes feels a bit different than her other books, I don’t mind at all.

“I love you so damn much,” I whisper. She lifts up, pressing her lips to mine in a kiss filled with promise. With love. With hope. Breaking the kiss, she wipes the tears from her cheeks and smiles up at me brightly. “Ready?” Grasping her hand in mine, I smile down at the beautiful woman by my side. “Ready.”

I love Presley, Hendy and their story. I give Out of the Ashes 4.5 stars. 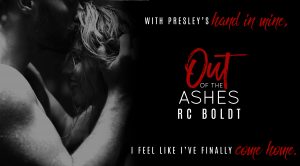