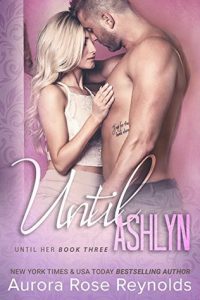 Dillon Keck knew Ashlyn Mayson was drunk when she suggested they get married. He knew he should have taken her back to their hotel room and put her to bed. Instead, he did what he had been craving to do since the moment they met.

Claim her as his.

Waking up married in Vegas isn't something Ashlyn Mayson ever thought would happen to her. Having Dillon, her boss, a man she thinks is a dick, insist they stay married is absurd, but every time he touches her, she gets lost in him and wonders if maybe they are meant to be together.

But someone isn't happy for Dillon and Ashlyn and their new found romance, and they're willing to do anything to keep them apart. Even commit murder.

“We’re married, baby, and you better get used to the idea, ’cause that shit is not changing. Ever.” “You’re not letting me go, blah blah blah… You’ve said it before.”

Ashlyn is an independent young woman; she loves her job at the dental office and is the proud owner of her own house. Her parents have a loving, strong relationship, just as her brother Jax has with his Ellie (their story is told in Until Jax). Ashlyn wants that for herself as well, but so far, she hasn’t been lucky; there’s something ‘wrong’ with every man she meets. The new dentist who took over the dental practice is the most attractive man she has ever seen; too bad his personality doesn’t match the outside.

“Dillon is annoying, bossy, and… fine, he can be nice sometimes. Plus, he’s uber-hot, but I hate him. Okay, I don’t hate him… but I really, really want to.”

Dillon is a young man who has taken over the practice of a retiring dentist. He has known for a long time he wanted to be a dentist, just as his father has been. Up until their untimely deaths, the parents of Dillon had a loving marriage. Dillon is looking for his special woman, but up until now he hasn’t find her. Taking over the practice meant also taking over the employees, and one of them is just too tempting, too beautiful to ignore.

“Behave.” “I swear I’ll be your good girl from now on if you don’t spank me,” I stage-whisper, and his hand spasms in mine as a smirk forms on his lips. “You don’t behave, I’ll bend you over and tan your ass right here.”

Ashlyn and Dillon are very attracted to each other, but no way they act on it. Ashlyn has some assumptions about Dillon that have placed him on the ‘black list’ and Dillon doesn’t know what to make of Ashlyn and her antics. Besides that, he’s her employer. A business trip to Las Vegas changes everything; alcohol and nearby wedding chapels aren’t the best combination. Back home Dillon has his work cut out for him; convincing Ashlyn their marriage isn’t a mistake is almost a fulltime job. Dillon and Ashlyn are a sweet couple; they have great chemistry and Dillon knows how to convince his reluctant wife..

After the previous book in this series (Until June) disappointed me a bit, I was a little hesitant to pick up Until Ashlyn. I’m so glad I did, this story gives me everything I love from the original Until series; the feels, a reluctant, sassy heroine, a wee bit over the top Alpha and some nasty villains. I love that Dillon isn’t the typical romantic hero who sleeps around until he meets the right woman; he’s the exact opposite. Getting married while intoxicated and without her beloved family isn’t something Ashlyn had in mind, I’m glad she stayed angry about it for a while and didn’t forgive Dillon right away. Throughout this book some hints are given about the next book in ‘the Until Him series’, Until Sage. I can’t wait!

“I love you,” I breathe, feeling his breath at the top of my head then his lips there. “Thank you for coming back to me,” he whispers, and I squeeze my eyes tight. “I will always find my way back to you,”

I love the story of Ashlyn and Dillon. I give Until Ashlyn 4 stars. 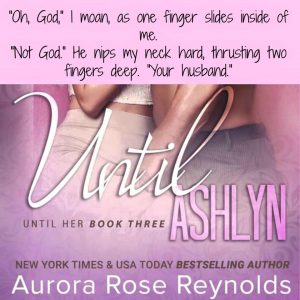