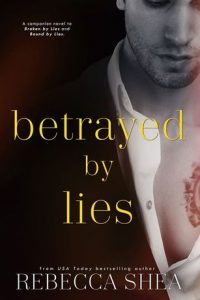 As an ATF agent, bringing down the Estrada cartel has been my sole mission. I’m a skilled agent, determined and fearless, but a relentless pursuit and a willingness to risk everything almost killed me.

A year later, when an opportunity in Los Angeles presents itself, I jump at the chance to start over and rebuild the career and life I almost lost.

Kate Stevens was not part of my new plan. I never expected she would be the one to save me from my past. She was exactly what I needed—smart, beautiful and independent. I finally have a future I look forward to.

Only nothing in my life ever goes according to plan. Losing Kate is not an option, but fate seems poised to ruin me, and there isn’t a damn thing I can do about it.

Betrayed by Lies is book three in ‘the Bound and Broken Series’ by Rebecca Shea, and tells the story of Sam. In the previous books, I wasn’t happy with Sam’s decisions and actions, but since then eighteen months have passed, and Sam has done a lot of thinking. I’m not angry with him anymore, and I love how he finds his Happily Ever After with Kate.

“New office. New job. New city. New state. New life. A chance to start over. A chance to leave the past where it belongs…in the past.”

Sam is finally back to being okay. The events from Bound by Lies have left their marks on him – physically and mentally – but now he’s ready to start his new life in Los Angeles. Over the months he has figured out his feelings for Emilia, and now knows he loves her as just a very good friend, nothing more. Sam isn’t looking for a woman in his life, but he can’t help the attraction he feels for Kate, his boss’s sister and his landlord…

“I don’t know a lot about you, Kate—but I’d like to find out more.” He captures my hand in his. “I’d like to know everything about you, Kate,” he utters, bringing his lips so close to mine I can almost feel them.”

Kate is a woman in her thirties has buried herself into her work for years. She’s successful as a corporate attorney, but her personal life has suffered from it; only very few good friends, but she’s close with her only brother Nick and his family. Renting out the guesthouse on her property to her brother’s new co-worker seems a smart choice, too bad she didn’t count on Sam. He’s nothing like she’s expected, and soon she starts to fall for the younger man.

“Nick startled me when I arrived home yesterday, but what startled me more was my instant attraction to Sam. Something in his eyes spoke to me without him saying a single word. He was tall with sun-kissed skin and golden brown eyes.”

Sam and Kate aren’t looking for anything more than a hookup, but they can’t stop the feelings they have for each other. Both have their reasons not to fall, but both fail miserably. For some reason, they are right for each other, and when they are past certain hurdles (hello big brother and former life) they try for something real and lasting. In true Rebecca Shea style the couple have some obstacles to overcome, but they get there.

I’ve enjoyed reading the story of Sam and Kate very much, but for some reason the ending felt a bit abrupt. Yes, there is an epilogue, but after all that was going on, the story was ‘just over’. I guess I wanted a bit more for Kate and Sam; more of them being back together, happy in love and more explanations. I love that although Kate is a grownup lady who makes her own choices, her brother Nick is still a bit ‘protective’ over her; he doesn’t want his sister getting hurt.

“His thumb caresses my cheek for a moment before he turns and walks toward the door. He stops, his hand resting on the door handle before he turns back to me. “This is just the beginning of us, Kate.”

I like Betrayed by Lies, I give the story of Kate and Sam 4 stars. 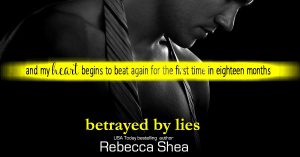 One Response to “Book review: Betrayed by Lies ~ Rebecca Shea”