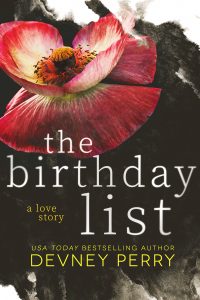 Happily married to her college sweetheart, Poppy lived a blessed life with the husband of her dreams. Then everything changed. She is no longer a wife. She is no longer the envy of her single friends. Now, people look at her with pity as they whisper a single word behind her back.

Years after her husband’s tragic death, years of pain and sorrow and wishing for the life she’ll never get back, Poppy decides to finish Jamie’s birthday list. She’ll do the things he wanted to most. Because maybe, just maybe, if she can complete his list, she can start to live again.

Poppy expects going through the birthday list will be hard. She expects it to hurt. But what she doesn’t expect is Cole. Could the man who delivered the news of her husband’s death and shattered her heart be the one to help her put it back together again?

Losing the love of your life in the unfairest way, how do you move on? Are you even able to do so? The Birthday List tells the story of young widow Poppy who’s still heartbroken by the loss of her beloved husband. Meeting Cole gives her a new perspective on life and a new chance on love.

“Hello. Even her voice affected me. Five years ago, the words she’d spoken had all been full of pain. But now? Her voice was so clear. There was nothing soft or timid about it. Nothing jaded or raspy. It was the purest voice I’d ever heard.”

With marrying her college sweetheart Jamie, Poppy thought they had their whole lives in front of them. But when Jamie is in the wrong place, at the wrong time, dreams are cut short. Poppy is doing the best she can, but a few years after Jamie’s death she’s still grieving. One of the things she does to honor Jamie, is fulfilling his ‘birthday list’, even though not everyone is happy she’s doing it. When Poppy meets Cole, she doesn’t know what to think, so friendship is all she can offer.

Policeman Cole knows Poppy, he has seen her at her worst, and he’s glad to see she’s doing okay. He’s attracted to her but knowing what she has been through he needs to be careful, not scare her away. When Cole finds about Poppy and Jamie’s birthday list he gets her, understands why she needs to do this, and helping her is the next logical step. So is falling in love with Poppy.

“I’ll do anything I can to help you.” His soft, intimate tone gave me heart flutters, but pain quickly chased them away. My heart flutters were supposed to be for Jamie. Guilt. Guilt was a heavy beast. It settled like a dead weight in my chest.”

Poppy and Cole are a sweet couple; they start out as friends, but it’s inevitable they will be become much more. It might seem strange they’re working together on Jamie’s birthday list, but to them it isn’t. The list is very important to Poppy, so Cole makes it his business as well. Poppy still loves her dead husband, her new feelings for Cole confuse her; they make her sad and happy at the same time. Cole might be an Alpha guy, but in this case he’s careful with Poppy. He loves her, and he knows her future is with him.

The Birthday List is already the sixth book by Devney Perry, and it’s a complete standalone. Like the ‘Jamison Valley Series’ the story has a sweet heroine, an Alpha hero (Cole keeps his caveman under control though), a whole group of side characters and a bit of mystery. I love this whole mix! My only tiny little issue with this book is one of the side-stories. I shouldn’t have paid so much attention to it, but my inner angst-addict wanted to know more (and was upset with the end-result) … Poppy and Cole however made me swoon, they deserve their love-filled Happily Ever After.

What I needed would always be Poppy. I considered myself a strong man, but this tiny woman in my arms had me beat every time. Three days after I’d rocked her world, and here she was, bringing peace and love back into my life.” 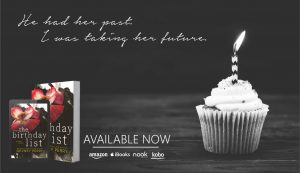 Turning to the door, I smiled, ready to greet my late-evening customer, but faltered as the door closed behind him.

Cole Goodman was walking my way.

My belly dipped as I took him in. His aviator sunglasses were perched on top of his chocolate-brown hair. A black polo stretched across his broad shoulders and pulled tight across his muscled arms. His pale-blue jeans molded to his Herculean thighs before draping down to his black, square-toed boots. The leather belt on Cole’s trim waist held both a shining badge and a holstered gun.

Cole smiled and locked his light-green eyes on mine as he crossed the room.

His straight, white teeth made my breath hitch—something that had happened last night more times than I wanted to admit.

Molly, who had turned around from her seat to greet our customer, spun around so her back was to Cole. Her cheeks flushed as she whispered, “Wow.”

He could give a woman a speeding ticket and get a thank-you in return. He inspired women to attempt push-ups in a karate class just for the chance to watch him sweat through his gi. Cole made grown women blush like teenagers and giggle in corners, like those girls at the dojo last night.