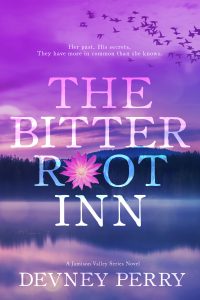 Her past. His secrets. They have more in common than she knows.

Maisy is happily content with the life she’s built for herself and her young son in small-town Prescott, Montana. Her child is thriving, her business is growing, and her family is as close as they’ve ever been. But when a handsome stranger walks into the lobby of her motel, her simple life is swept up in a wave of affection for his gentle heart. None of those feelings can be trusted, though. She made that mistake before with another man. The man she murdered.

Hunter was a different man when he first saw Maisy Holt from afar. He took one look at her and ran in the opposite direction. But years later, he’s back in Montana and unable to keep his distance. He shouldn’t have tried to find her but he never was good at rejecting temptation. The promise of the good she could bring into his life is too hard to resist. Maybe if he can disguise the lies and hide the deceit, he can keep her from learning the truth. Because his only chance at a future with her is by burying his past.

Would you be able to move on when your last relationship ended in absolute horror? Would you have the courage to take a chance at a new love? Since I met Maisy in The Coppersmith Farmhouse I’ve always been curious about her and her young son. The Bitterroot Inn tells the story of Maisy finding her happy with a good guy, and I love it.

“Maisy Holt was under my skin. Hell, I’d almost kissed her today. I’d been in Prescott for less than a week and she was all I could think about.”

After her ordeal, Maisy has thrown herself into loving and taking care of her son Coby, and building her inn. She gets lots of help from her family and friends, but lately she starts to feel lonely. All her friends have found love, and Maisy wants that too, somebody to share her life with. But thanks to her psycho ex, she doesn’t trust easily, doesn’t let new people in. New-in-town Hunter however is an exception.

Hunter moves to Prescott to start a new chapter in his life. Years ago, he has seen Maisy, and to this day he’s thinking about her, hoping he might have a chance with her and her son. Hunter knows very well the secret he carries can ruin everything, but he’s willing to put his heart on the line.

“His eyes weren’t waiting for mine as I’d expected. They were locked on my mouth, doing some lip inspection of their own. Did he want to kiss me too? At the thought, my tongue darted out automatically and wet my bottom lip. Hunter’s eyes flared and snapped to mine.”

The Bitterroot Inn is the fifth (and sadly the last) book in ‘the Jamison Valley Series’. Like the other books in the series this story is sweet with a bit of drama. Nothing over-the-top, but it adds to the storyline. Maisy and Hunter are a great couple, Cody is an adorable little boy and I love to see the couples from the previous books again.

I’m so happy for Maisy that she gets her HEA, after everything her ex put her through she deserves nothing less. Hunter, Hunter, Hunter… You’re a loving and sexy guy, but ‘lying’ to Maisy is not okay in my book. I get the reason why he kept it a secret, but I’m still angry with him. I’m glad Maisy let him grovel for a bit, but I would have let him spend a lot longer in the doghouse. But even after everything, I love Maisy and Hunter together (and with Cody), they bring out the best in each other.

“It was everything I had ever wanted for my life. A happy life. A life filled with more love than some people found in a lifetime. A life with a man that would forever make me smile.”