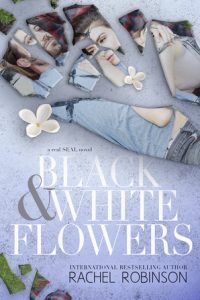 Carina Painter lives a life she created in between the pages of her bestselling novel. At least, that’s what she outwardly portrays. A heart-rending childhood followed by an abusive engagement leaves her broken in all ways possible. A chance encounter provides the fork in the road she so desperately desires.

Navy SEAL Smith Eppington is fighting the war of his lifetime. One that isn’t fought with weapons and highly sought intelligence. It’s a battle to remember his past. The accident that scarred seventy five percent of his body, and stole the life of his best friend also seized parts and pieces of his memory. When an author asks to interview him for a fiction novel, he’s ready to pour his heart out no matter the cost.

The friendship that blossoms between Smith and Carina is something extraordinary. It’s a living, breathing love story about finding yourself, change that is out of your control, grasping what you can, and letting go of everything else.

In a twist of kismet, remembering could destroy everything, but fiction may be what saves the day. A friendship built on new truths and a relationship torn apart by old lies collide in a poignant novel by International Bestselling Author, Rachel Robinson.

Books by Rachel Robinson always make me a bit nervous. Her characters are very realistic; with all the emotions, reactions and flaws of real-life people. And that makes them do things at times I don’t want to happen in my romance books. But it also what makes me love her stories, that realness. The story of Carina and Smith – Black and White Flowers – is not an easy one, but I love it.

“Forever is a pipe dream. We’re lucky enough to have right now and we’re going to make the most of it. If luck is on our side, because we are surely owed some of that, time will grace us with the ability to love each other so much that the amount of months and years doesn’t matter.”

Carina is a romance author who is living a peaceful live with her fiancé Rourke. But not all is what it seems. Behind closed doors Rourke is a totally different man, cruel and abusive. Carina doesn’t know how to get out, her childhood experiences and her fiancé have broken down her spirit bit by bit. For her new book Carina wants to interview a real SEAL, to make her book as real as possible. A chance meeting with Smith changes everything. Not only does he turn out to be a great character to write about, but Smith also re-awakens Carina’s spirit.

“I hold little to no control over my life. I’m flailing, drowning in an ocean of pain and grief. Something has to change. It needs to, because the more time that passes the stronger my outlook on the world gets. It’s better off without me in it.”

Navy SEAL Smith is trying to rebuild his life. A horrific accident has killed his best friend and left him scarred and without a complete memory. Although he and his fiancé Megan have been happy for years, he can’t remember her and their time together. While she’s basically a stranger to him, Smith holds on to Megan; he promised a dying man to live in honor, to do the right thing. Giving up on his – to him unknown – life with Megan isn’t an option. When he meets Carina, she awakens something in him, he has to get to know the woman behind the author.

“The accident stole things of importance—because memories and experiences are what shape a person. I’m not who I was before it. I have the same name, but I’m a stranger in my own skin.”

When Carina and Smith meet, they are both in a relationship with other people. Both are scarred by their pasts and both are afraid to let go. Smith believes he should love his beautiful, kind fiancé, but he just can’t remember Megan and the feelings he had for her. He feels very guilty over this, and doesn’t know what to do. Carina is still with her abusive fiancé, but meeting Smith gives her the courage to walk away. When Megan loses hope to a full recovery for Smith, he and Carina become friends, very good friends while working on Carina’s book. Both single now they slowly start to build towards a romantic relationship, but then the world literally crashes down. Everything changes, not just for Smith and Carina.

Like I already said, books by Rachel Robinson make me nervous, and I was right to be nervous about Black and White Flowers. The story – even though realistic and beautiful at times – is one angst-y roller-coaster ride with a huge, unexpected twist. The book has given m e every emotion; happy, sad, furious, stunned and relieved. Carina is growing up a lot throughout the story, from an abused woman she transforms into a woman who knows what she wants and more importantly, what she deserves; everything. Smith is a realistic hero; while I applaud his sense of honor and commitment I wanted to strangle him at times. But this is one of the reasons I love the author’s work; her real-life, flawed heroes.

“Can you promise forever?” My voice shakes as I ask a question I never dared to ask from anyone else. He sits up, a smile beaming bright on his beautiful face. Grabbing my face, he kisses me once, then again. Once more just to taste me, and I sigh in contentment. “Marry me.”

I love Carina and Smith, and their complicated story. I give Black and White Flowers 5 stars. 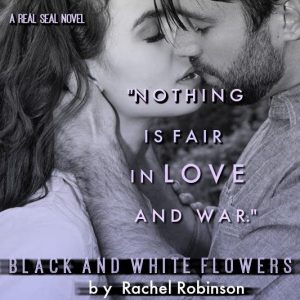 Shrugging, he pulls me into his warm, shirtless body and yanks the quilt back up to our necks, his hands now wandering over my body. “Sleep is the very last thing on my mind right now.” His gaze burns into mine and his hands find the hem of my nightshirt. His lips twitch. “You wear so little to bed. I can’t help myself,” he says. With a featherlight touch his fingertips stroke the side of my thigh up to the string of my panties. He hooks a finger in and drags his finger underneath it, teasing himself. Teasing me, too. “It took all of my self-control to go to sleep with this much of your bare skin in touching proximity.”

I blush. Big time. Everything below my waist cries out for attention in one wild rush of excitement. It’s been too long. But it’s more than that now because everything before this has been lukewarm. “What did you do at work last night?” I ask before all important thoughts flee my mind in favor of his touch—something that scrambles my brain cells. “Why did it take so long?”

His face changes. His hand stops on my hipbone and he grabs it, his fingers encompassing the whole side of my body. Breathing in and out makes his hand move with me. It’s warm. It’s demanding. “It’s nothing for you to worry about,” Smith replies.

I shake my head. “When people say stuff like that typically there is almost always something to worry about, but you don’t want to worry the person. Do you see how counterintuitive that is? Now I’m worried because you told me not to worry.”

He sighs and then pulls the covers over his head and disappears under the blankets. In a fast maneuver that tickles and makes me pull away in mock protest, he makes his way between my legs. With the edge of the quilt in my hand I lift it to see his smiling face between my knees. “You’re trying to distract me,” I say. Pressing my lips into a firm line, I try to hold a serious face. “Smith Eppington. You better tell me what I want to know.”

Smith takes the sides of my panties and pulls them down and off my body with one fierce tug. It’s playful, but so damn hot at the same. Some noise exits my mouth and it makes him smile, his good side wider than his bad. I shake my head. “Is it working?” he asks, then kisses the inside of my right thigh. “Are you distracted?” His warm breath on my skin clenches my core. He drags his lips up and down, inching his way higher.

I adjust my legs and try to calm my breaths. “I don’t see how I can’t be distracted with my underwear on the floor and your head between my legs. I don’t forget,” I say. Tapping the side of my head, I finish, “I’m like an elephant.”

He licks the inside of my left thigh and runs his hands under my nightshirt up and down the sides of my rib cage. I shiver. Tipping my head back, I close my eyes.

“An elephant isn’t what I want to think about right now,” Smith growls. “I’d ask you how you like this, but I honestly don’t care. I’m starving for you. You’re wet. I smell you.” With his lips pressing against my skin, and the disappearance of my panties, he’s turned into a lust crazed man. A man I’ve wanted to meet since I first laid eyes on him.