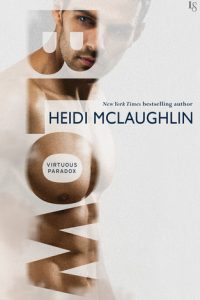 I received this book from NetGalley in exchange for an honest review. This does not affect my opinion of the book or the content of my review.

Meet the complicated men behind the sexiest boy band in America! In Blow, the start of an emotionally charged series from bestselling author Heidi McLaughlin, an insatiable heartthrob gets blinded by the spotlight—and learns to fight for love.

Bodhi McKnight has always had everything handed to him on a silver platter: fame, success, money, girls. The raven-haired, blue-eyed hottie is the son of Hollywood A-listers, and when he’s asked to join the boy band Virtuous Paradox, his star shoots even higher. But so do expectations, leading Bodhi down a destructive path of addiction—until a drop-dead gorgeous guardian angel shows him her sizzling brand of tough love.

When Bodhi ends up in rehab, he doesn’t expect to meet someone as cool and down-to-earth as Kimberly Gordon. Although he’s enjoyed the company of beautiful, charming women before, none of them have tried to get to know the “real” Bodhi. But Kimberly isn’t fazed by his stardom. She’d rather go horseback riding, teach Bodhi to play guitar, or ask him about his feelings. Soon Bodhi realizes he’s fallen head over heels for her. He just hopes that he’s strong enough to protect what they have from all the pressures and temptations of the outside world.

“I hate myself. I hate my life. I cry while I look at the person I am with my dad standing behind me, his hand on my shoulder, not saying a word. He should yell, scream, and tell me how much of a loser I am.”

Bodhi is the son of Hollywood celebrities who turned out to be a pretty decent singer himself. Being part of boyband Virtuous Paradox he and his two bandmembers are always in the spotlight, and the pressure is big. Growing up Bodhi had everything he could wish for, except for one thing; the attention of his parents. Because of their work they were hardly around, leaving Bodhi in the care of nannies. This has left Bodhi a bit damaged, a bit insecure; he’s feeling an imposter, like he doesn’t deserve his success. Bodhi’s insecurity and the growing pressure leads to destructive behavior; cocaine. When his family and his band manager find out the extent of the abuse, Bodhi is shipped off to rehab. Here he meets Kimberly, and the moment Bodhi meets her he’s intrigued.

“Do you want me to stop touching?” My hand ghosts over her exposed skin from her neck to her shoulder and along her collarbone. Feather-light touches meant to entice. “I’m not sure anymore.” “Of what? “Of anything.”

Kimberly is working on her father’s rehab-center. She isn’t a qualified psychiatrist yet, but she coaches the patients with one – on – one talks. Since the divorce of her parents Kimberly has spent a lot of time in the rehab-center and she knows how to handle the patients. Of course, Kimberly is familiar with Virtuous Paradox, but she isn’t a big fan of the band; she doesn’t like off-stage behavior of the young men. But Bodhi in real life is something different; even though Kimberly knows very well fraternizing with patients is not done, she can’t stay away from him.

“Don’t go,” he begs. I glance at the door and close my eyes. The torment I’m feeling is unrealistic. I’ve known this man for hours—not months, not even days, but hours—and I’m already willing to do as he says. No, I can’t. I can’t be weak despite what my body is telling me to do.”

The moment Bodhi and Kimberly meet there’s an instant attraction. The couple tries to stay away from each other, but since this is a romance book, that won’t happen. Bodhi has never felt anything real for a woman; feeling this while battling an addiction isn’t easy. But he knows his feelings are real, and that Kimberly is the woman for him. Kimberly is a bit hesitant at first, but Bodhi is waking up feelings in her she can’t deny. Bodhi and Kimberly are a sweet couple with great chemistry; they just belong together.

Blow is the first book in ‘the Virtuous Paradox series’, which tells the story of a boyband like we have seen numerous times since New Kids on the Block (Yes, I was a bit of a fan..). Well looking young men with some talent are put together in a band, they can sing and dance, and have a ruthless manager. The attention they get is immense, and the pressure to perform is high. Our Bodhi can’t handle it, and like many real-life band members he finds solace in drugs and goes to rehab. And here is where to story turns against itself for me. I really like Bodhi and Kimberly as a couple, but I find the timing of their romance a bit unbelievable. Battling a cocaine addiction is very hard work, going through detox is hell. But Bodhi somehow manages to do it all at once.

“I love you.” “I love you, Bodhi.” Silence falls upon us as we hold each other. There are small kisses here and there, but nothing more. This is what I needed. I needed her here and in my arms to complete me.”

I like Bodhi and Kimber as a couple, but due to my issues with the story I give Blow 3.5 stars.