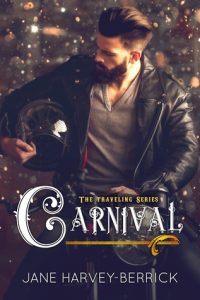 Empty inside, cold in his heart, Zef turned to whisky and drugs to fill the void.

Instead, he ended up with a prison sentence and a new determination to get clean and make something of his life.

Since his release, Zef has been on the road, finding his spiritual home with a traveling carnival and working as a motorcycle stunt rider.

He doesn’t want to be tied down to anyone or anything. Fiercely loyal, the only people he cares about are his brother and his carnie family.

Until a crazy girl who’s run away to join the circus crashes into his world.
But now his old life is catching up with him, and Zef has to choose a new road.

One of my favorite ‘older’ series is ‘The Traveling Series’ by Jane Harvey-Berrick. I love these angst-y books about the carnival, the not-so-normal life these people live, and the characters of course are amazing. Carnival tells the story of Zef, one of the side-characters from the previous books. He was a bit of a mystery before, but I love his sweet story.

“I’m not the kind of guy women want for a boyfriend,” I said, her own words tearing free an honest response that surprised me. She stared up, a small frown creasing her smooth forehead. “Why not?” I shrugged, uncomfortable with her continued questions. “I’m just not.”

Zef is a bit done with his live. Well, he loves the carnival and working side by side with the guys he considers his brothers, but lately it isn’t enough. Kes and Tucker have found their Ones, and secretly Zef wants the same thing. He’s done with being wild, with random hookups and wants to settle down as well. Sara is on the run; after her life spiraled out of control, she saw no other option but leaving. It’s not really what she wants, but given her circumstances it’s the only choice she has. Zef and Sara start out as friends, but slowly their relationship starts to change into something more.

“I felt happy for the first time in a long while. A very long while. Zef made me happy. And I was going to do everything I could to make him happy, too.”

Carnival is the fourth book in ‘The Traveling Series’, and brings the reader back to the world of Kes, Tucker and Zef. Zef and Sara’s sweet romance is the main story, but there a bunch of other storylines in the background. I love to see all the people again, and learn more about a few of them. Carnival is, unlike the other books in the series, a sweet story about two people dancing around each other, with some laughter and tears. Carnival is told mainly from Zef’s POV, and while this is his and Sara’s book, it’s also about Zef becoming a better man and about the carnie life.

I didn’t know much about Zef, but in Carnival I really like him. He messed up, did his time, and is now ready to move on to a new life. I feel a bit double about Sara; I want to hug her and tell her all will be okay, but sometimes… But then again, she’s so very young, only 18 years old. I don’t know what I would have done in her circumstances. The age difference between Zef and Sara doesn’t bother me (but I understand his reservations), they just feel right together.

“I had everything I could want, which isn’t so much as it turns out. I had my friends and family; a woman who loved me, despite all my flaws and failings; I had a son that I’d lay down my life for. And I had the carnival. Life was good.” 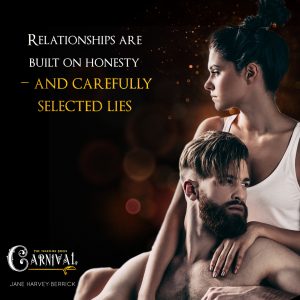 It wouldn’t have been so bad if I’d landed on my good leg, but I didn’t, and the pain was so intense, my vision went black and all I knew was deafening silence.

I woke up a few seconds later wondering if I’d died and gone to Heaven, because the view was pretty damn good and surely an Angel was watching over me. But as my vision cleared, I realized that Sara was on her knees in the dirt next to me. I think she was screaming, but my ears were ringing so badly, I couldn’t tell.

I struggled to sit up, but she held me down by my shoulders.

Kes was next to me, lifting my visor carefully.

“Wait for the paramedics, man.”

Flames of pain were running up from my ankle to my thigh.

“I think I fucked up my knee again,” I groaned.

“Does anything else hurt?”

Kes grinned and I heard Tucker’s relieved laugh behind me. I squinted up at him.

“Yeah, Zef,” he grinned. “We’re all good. You certainly gave the crowd their money’s worth. Can you do that again?”

Then Sara screamed at him.

“Shut up! Shut up! He could have died! He’s hurt! He’s really hurt, and you’re just making a big joke of it!”

And then she burst into tears.

And she flung herself across my body, gasping and crying. I thought she was going to have a complete meltdown when the paramedics tried to pull her off me.

“Sara, honey,” I gritted out while my whole body felt like it had been run over by a charging rhino, “they’ll do a much better job of getting me onto a stretcher if you climb off of me now.”

She stumbled back, wiping her eyes and nose as I helped the paramedics get me onto the stretcher.

The crowd was on their feet, expressions of interest or horror, depending on how macabre they liked their shows, so I gave them a quick wave and heard applause and cries of relief.

“We’ll see you at the hospital,” Kes called after me.

I gave him a thumbs up, then relaxed back on the stretcher, my knee throbbing like a mofo. Sara was walking next to me, still crying, so I lifted up my gloved hand and she clung onto it as if it would save her from drowning.

But waking up and seeing her sweet face, thinking it felt like Heaven, I wondered if I was the one who was drowning.