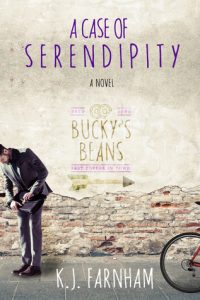 I received this book from Panda & Boodle in exchange for an honest review. This does not affect my opinion of the book or the content of my review.

Ruth Bateman is at her wit’s end. If Bucky’s Beans doesn’t stop spamming her phone with discount codes for frou-frou java concoctions, she’s going to flip. After multiple failed attempts to unsubscribe, Ruth takes to the company’s Facebook page to vent her frustration over the never-ending texts.

When attorney, Henry Mancuso, stumbles upon Ruth’s complaint, he has no idea that a simple Facebook scroll is going to change his life. Now, he has to get Ruth to agree to a class action lawsuit when she’s just looking for some peace on her mobile device—not a drawn-out case against a coffeehouse giant.

As Ruth and Henry battle the legal waters, a friendship full of fun and spontaneity blooms. But could something more be brewing between these two and this coffeehouse case?

Intrigued by a person you have never personally met, only through an e-mail conversation (and not even about personal things)? A Case of Serendipity tells the story of Ruth and Henry, who meet thanks to an overly-active spamming coffeehouse. Compared to the books I normally read it’s pretty tame, but I’ve enjoyed reading this sweet story.

“It is something I hope for. That certain level of intimacy. The feeling of being with someone who makes my insides quiver and knowing that I make their insides feel the same way.”

Ruth and Henry are both going through life. Ruth is getting her life back in order after her divorce and is figuring out what she wants and who she wants to be. Henry is a hardworking lawyer who doesn’t have time for anything outside the office. Even the casual fling he has with his co-worker isn’t what it used to be. When Henry starts to work on Ruth’s case against the spamming coffeehouse, the two message each other a lot, and both start to look forward to the emails. It’s only a matter of time before lines get crossed and feelings get involved…

“My eyes snap open. Why am I thinking these things about her?”

I love how Ruth and Henry really take their time to get to know each other. This certainly isn’t an insta-love story with over-the-top moments, it’s even a bit on the slowburn side. Ruth and Henry are both realistic people, with hopes and dreams for something more. I love this couple.

A Case of Serendipity is my first book by K.J. Farnham. It’s a sweet and funny well-written story told from a double POV, with two very likable leading characters. Normally I like some naughty time in my romantic reads, but I didn’t even miss it in this book, Henry and Ruth are more then enough. This certainly isn’t my last book by this author!

“I’ll go anywhere and do anything you want, Ruth, if it means I get to be with—” Before he can utter another word, I launch myself at him and wrap my arms around his neck.” 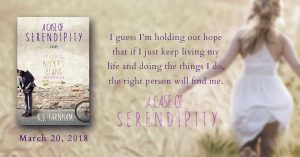