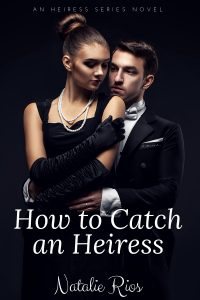 Anthony Carter has not had it easy in life. In a matter of months, he lost his mother to cancer along with his much coveted spot in a prestigious doctoral program. Swimming in debt, he’s been forced to move back to his hometown in rural Montana and take whatever job he can find. A drunken weekend in Vegas is exactly what he needs to help him forget his problems.

A recent break-up with her boyfriend of nearly a decade has left straight-laced Liz Rockwell disillusioned with love and in desperate need of a vacation. She gets more than she bargained for when one drunken night at a Vegas bar results in her being married to Anthony. Embarrassed by her lapse in judgment, Liz is ready to make this whole night just go away. A quickie divorce seems like the best solution to their problem, until Anthony realizes who Liz really is.

Known in the media as the Candy Heiress, billionaire Liz is the answer to Anthony’s prayers. All he has to do is convince her to write him a check. Unfortunately, Liz is not one to be easily intimidated or coerced. Discovering the Rockwell family secret may be Anthony’s only hope. But the more time he spends with the intelligent and tenacious Liz, the more he realizes their chapel wedding may not have been such a drunken mistake after all…

“Let’s make a toast. To new friends, fine scotch, and hopefully some new adventures.” “Hear, hear.” I clinked my glass against his. “Our luck’s got to turn at some point.”

Anthony is not in a happy place. He has lost the only parent he had – his mother – to cancer, and due to one drunken mistake he has lost his spot at a PhD program at MIT. Both the illness of his mother and the lost PhD program have left him with a huge debt, something Anthony isn’t able to pay off with his meager job at a diner. When his friends/colleagues from said diner convince him to go to Las Vegas with them, Anthony meets the beautiful Liz. And she might be what he needs to solve his problems.

“What was most attractive about Liz was the confidence she exuded. The way she carried herself, it was like she knew exactly who she was and where she was going in life. Two things I greatly wished for myself at the moment.”

Liz doesn’t believe in love and fairytales anymore. The behavior of her longtime ex-boyfriend after their breakup, her father’s way with the ladies and her work as a divorce attorney make her question everything. All Liz wants now is to forget everything for just a weekend, and what is a better way than to spend time with your besties in Vegas? But when her friends don’t show up, Liz meets cute Anthony who has an amazing smile. When Liz wakes up the next morning it turns out they had more fun than she can remember…

“Did I say earlier he was just cute? I don’t know if it was the alcohol or the dimples, but he definitely just jumped a few notches on the hotness scale with his megawatt smile. Wow. Talk about brightening the place up.”

When Anthony and Liz meet, both are feeling a little sorry for themselves. The weekends they had in mind aren’t going as planned, but soon they hit it off in a friendly way. When the alcohol and fun is gone the next morning, practical Liz has an answer to the drunken marriage fiasco, and Anthony only can agree to it. That is until he learns who his new wife really is; not just a hot girl, but an heiress to quite a fortune. And this can be the answer to his money problems… Liz understands Anthony’s motives for delaying the divorce very quickly, but she agrees to his plan of spending some time together. Anthony soon realizes Liz is so much more than just an heiress, and Liz discovers the truth about Anthony’s misfortune. Do they have a chance at a HEA? Of course they do, this is a romance book.

How to Catch an Heiress is Natalie Rios’ debut book. For a debut book it’s well written, I like the characters and I feel their struggles are realistic. Some of the secondary characters are a bit over-the-top, but since this is more of a rom-com story, I don’t mind. I really like that this story’s hero is a normal man for once; he doesn’t have his life in order, he isn’t man-whoring around while waiting for the love of his life to shower with his overbearing type of love. He’s just your regular guy. I also like that Liz is making her own life, with the money she earns by herself, instead of leaning back on her family name and fortune.

“Can we go back to the ‘I love you’ part?” “Too. I said ‘I love you, too’,” she corrected. “That should have been my response to when you said it, I was just too scared to admit it back then.”

I’ve enjoyed reading this story, I give How to Catch an Heiress 4 stars. I’ll definitely pick up future books by this author.

“Now that you’ve fed me, tell me why you’re really here. How does this visit fit in with your master plan?”

“Master plan?” Anthony chuckled. “What master plan? I’m not a comic book villain, Liz. I’m not trying to take over the world or anything.”

“No, you’re just trying to squeeze money out of me. Quit trying to play me like I’m stupid. I know you’re up to something.”

Sitting back in his leather seat, the man had the nerve to look delighted, like he found this entire conversation incredibly entertaining. “If I did have a master plan, what makes you think I would tell you? The element of surprise would only work in my favor.”

The only acknowledgment I gave that statement was a roll of my eyes. “I’ve narrowed it down to two possibilities. You’re either trying to charm me into writing you a check or attempting to get one of my relatives to do so, Robbie and my father being the leading suspects.”

Shaking his head, he laughed. Loudly. Like I’d suggested he was communing with ghosts or some equally ridiculous scenario. Crossing my arms, I scolded him. “So glad you’ve managed to find humor in this.”

“I’m sorry,” he managed to wheeze out between laughs. “You’re just so off base, it’s hysterical.”

Picking up a pea from my now cold lunch, I flung it at him. “Ass. Enlighten me then.”

“We’ve been over the whole sex thing. Neither one of us is interested.” That was a lie, of course. I was definitely more than interested and if the hard ridge of his jeans last night was anything to go by, so was he. I couldn’t call him out on it though. Our attraction was a fact we were both actively trying to ignore into oblivion.

One Response to “Book review: How To Catch an Heiress ~ Natalie Rios”