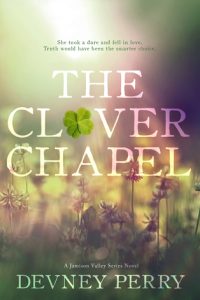 She took a dare and fell in love. Truth would have been the smarter choice.

After years of living under her father’s thumb, Emmeline is ready to break free. She’s abandoned her life as a New York socialite to follow her dream of becoming a kindergarten teacher in a small, wholesome town. Seeing the man that nearly broke her was absolutely not what she had hoped to find in Prescott, Montana.

Nick hasn’t seen his Emmy in nine years, but that doesn’t mean he’s forgotten a thing about the woman he loves. After just one blissful night as man and wife, he gave her up, sacrificing his own happiness to keep her safe—far away from him. But the moment she walks back into his lonely life is the moment he decides never to let her go again. He won’t waste his second chance. All he has to do is win back Emmeline’s heart, keep her safe from the shadows in his past and prove to her that taking a wager on him is a sure bet.

The Clover Chapel is the second book in Devney Perry’s Jamison Valley series. Book one – The Coppersmith Farmhouse – was the author’s debut book, and I loved it. To say I was curious for the second book is an understatement. I was hoping for another leading couple, but Nick and Emmy don’t disappoint. I love their second-chance at love.

“No matter what we did tonight, it would be amazing just because it was with him. “What’s your name?” he asked. “Emmeline Austin.” “Emmy. I’m Nick Slater.”

Emmeline – or Emmy for friends – is done with her life in New York; coming from a rich family brings certain expectations and she’s just done with it. Leaving her social life behind and becoming a schoolteacher in Montana is her dream come true. Well, she does have to make some sacrifices, but she’s willing to give it a try. To Emmy’s disbelief her new town turns out to be the hometown of her long-lost husband Nick. Nine years ago, they fell hard and fast for each other, but Nick left without a word. He had his reasons, very good ones, but his decision has hurt Emmy deeply. Living in the same town gives the couple a chance to start over.

“Emmy. You’ll always be my Emmy.” “I’m not your anything, Nick.” “You’re my wife.” “A paper certificate does not make me your wife.”

Nine years can change a person. Both Nick and Emmy aren’t the people they’re used to be. Especially Emmy has changed a lot. Back then she was searching, unsure what she wanted. Now she knows much more. The sociality life isn’t for her, and she has chosen to move away from her controlling family and their double standards. Nick sees Emmy’s move to Prescott as a second chance. Although there have been other women in his life, Emmy is still special to him, and he wants to make it work. Emmy however is a bit more hesitant. She wants answers and isn’t looking for a new man in her life. But Nick is an Alpha guy who knows what he wants, and slowly Emmy starts to open up to him again.

The Clover Chapel is just like the first book in the series a sweet story about an Alpha guy falling for a real woman. Well, that’s not exactly true. Nick and Emmy already have history, and now they’re getting to know the people they’ve become. That the couple ends up together is a no-brainer, but there are a lot of other things going on, and some of them I did not suspect. While I love Emmy and Nick, The Clover Chapel didn’t captivate me as much as The Coppersmith Farmhouse. I’m not sure why, the writing was still as great and the story has all the right ingredients.

“I love you, Emmy,” he said, looking up at me. “I love you, Nick.” We were finally getting our happy ending, starting the life that we had both longed for all those years ago.”

I’ve enjoyed reading The Clover Chapel, I give the story of Nick and Emmy 4 stars.