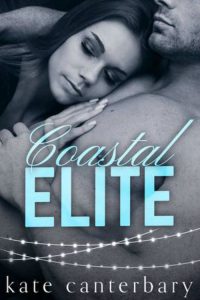 Jordan Kaisall has problems.
Business problems, political problems, cheating ex-girlfriend problems. He knows that a week away from the Washington D.C. Beltway won't do a damn bit of good for those problems, but his beach house in Montauk is exactly where he needs to be right now.

April Veach has plans.
Work plans, travel plans, try-everything-once plans. Montauk is keeping her plenty busy this summer between decorating wedding cakes and teaching yoga, and busy is good. But busy is also a lonely bed, and that wasn't part of her grand plan.

After a weekend together, his problems and her plans take them in an unexpected direction.

I know Kate Canterbary for her ‘Walsh Series’, the interconnected books about the Walsh Family. I like the sweet books with a dose of emotion, angst and great characters. Coastal Elite is the author’s latest book and tells the story of Jordan and April. It has a bit of a twist and I like it.

“The world, it wasn’t black and white. It wasn’t a clean dichotomy of good and evil, right and wrong. It was shades upon shades of gray, and I owned that gray.”

Jordan is a former Navy Seal who now owns a private security business, together with his Seal buddy Will. Two bullets ended his Seal career, but that didn’t slow Jordan down. He’s a hardworking man who likes his work; the ‘boring’ routine security stuff and the more hidden activities of their firm. Being away from home for weeks on end isn’t good for a healthy relationship, so Jordan doesn’t do serious relations. Meeting April makes him to want more. More than a week here and there, just more.

“She was all that I wanted. It was irrelevant whether it had been two days or two years. There was a weight in my chest, a gravity associated with finding someone who brought levity to my spirit and fire to my soul. It was all in there.”

The moment Jordan meets April he’s attracted to the easy-going woman. She’s the total opposite of his last ‘girlfriend’, and he can’t stay away from her. Things heat up very quickly, but it feels right, and sexy, and hot… Despite their very different lives they just match. For Jordan, it’s clear their fling isn’t something temporary, but before he and April can really be together they have a few hurdles to tackle…

It has been a while since I’ve read a book by this author, and I’m not sure why… I like her books; they’re well written and the right combination of a great leading couple, a bit of angst, and of course emotions. Coastal Elite is no exception. Well, there’s one difference. Unlike her other books Coastal Elite is almost entirely written from Jordan’s POV. Given what happens throughout the book I was curious for April, for her feelings and motivations. I really like Jordan, but April remains a bit of a mystery.

“Yes, because I love you for always,” I said, sighing when my hands met the small of his back. “Yes, because I don’t need a ring or vows to be happy but I want my forever with you.”

I’ve enjoyed reading Coastal Elite, I give it 4 stars. 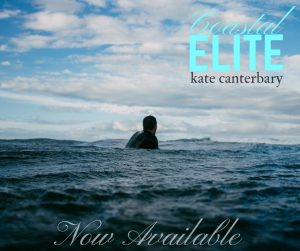