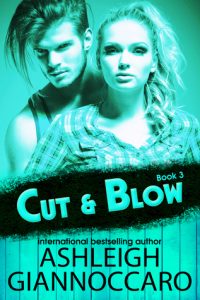 Viviana is playing a dangerous game, one that will destroy her mob family’s reputation. After hours she indulges in a fetish that not only has Romi stalking her online, but one that has them messaging each other in private. She’s toying with his heart, tempting his body, and has exposed all of herself to him. How did it get to this? If Rain finds out, she’s dead and so is he.

Romeo is done pretending to be someone he’s not. The cover he’s used when working in the salon no longer feels authentic or right. He drops the facade, proving over and over that he is definitely into the fairer sex. Now that he’s unleashed his true self he can’t restrain the aggression, possessiveness, and anger that’s eating him up inside. He’s in love with a woman he can’t have, a woman who’s banging someone else, a woman he’s obsessed with.

He didn’t choose the mob life and this may be his ruin. If Rain ever finds out what they’ve done they won’t live another day. Addictions need to be fed, and flirting with danger is just a perk of having his heart ripped out by the boss’s sister.

Some things are worth dying for; Viviana is his death sentence.

Cut & Blow 3 is already the third book in the series, and brings us readers back to the shiny hair salon with its ties to the not so shiny underworld… This time the story is about hairdresser Romeo and client Viviana. He escaped the criminal life, she’s Rain’s little sister. What can go wrong?

“I never imagined her that way. Well I did, but I never thought she was a dirty little minx beneath that innocent smile and perfect makeup.”

Romeo knows firsthand how a life of crime can go very wrong, so he does whatever it takes to get away from his father’s ‘colleagues’. Even if this means being supposedly gay (totally not true) and working as a hairdresser (something he’s good at). Viviana is a regular client at the salon, and Romeo’s fantasy, especially after he found out her dirty little secret.

Viviana is a bored crime-princess. Her brother Rain is firmly in control of the family and business, and he has his own ideas for his little sister. When her little walk on the wild side turns against her, she’s afraid to turn to her brother for help, but she can’t say no to a possessive Romeo.

“Do you know how hard it is to forget the best sex of your life? It’s like it is burned into my eyelids and every time I close them I can see it, feel it. He is everywhere and nowhere.”

Cut & Blow 3 is a wee bit different than the other books in the series. Yes, it’s still has a light tone with some dark moments, but it’s less gory. Romeo and Viviana are not involved in the core family business, so it doesn’t really surprise me. But don’t worry, there’s enough going on; it’s hot, it’s a bit dubious at times, old friends pop up, I love it.

Viv! Girl! What the heck were you thinking! I applaud owning your sexuality and all… But you know your brother, his line of work and most importantly his crazy-ass temper… What did you think would happen? Like the other men in the Cut & Blow world, Romeo is not your average guy; he’s controlling, sneaky and has his lesser moments. To be honest, the two of them together are a mess, but I love them for each other.

“She looks into my eyes and I know that she is mine, that I will never let someone else have her like I have her. She will be enough, probably too much, for me forever.” 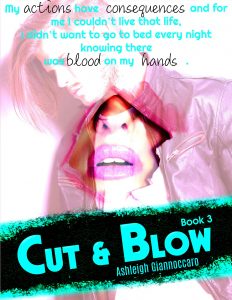