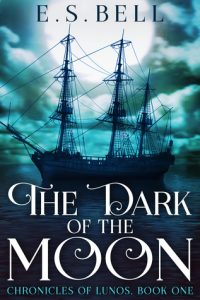 Centuries ago, dragons broke the old world and scattered the pieces across the oceans. On this new world of islands swathed in seas, sailors are kings, and the moon god holds dominion...

Selena Koren is the moon god’s most powerful Paladin; a skilled warrior and blessed with the most potent magic. She also bears the god’s terrible wrath. Ten years before, during the bloody Zak’reth War, Selena summoned the seas to destroy her enemy's armada. The Zak’reth screamed and drowned and died, but so too did four hundred innocents. In its fury, the god smote Selena with a terrible wound: a crescent-shaped hole in her chest that breathes its icy breath every moment of every day so that she never knows warmth.

Now, her temple sends Selena on a quest to kill two powerful dark priests. This alone, she is assured, will close her terrible wound. The thought of killing without provocation rattles her soul but Selena can suffer the cold no longer.

Sebastian Vaas is the world’s deadliest assassin. Bards compose ballads of his depravity; children sing rhymes in the streets. His bloody vengeance against the Zak’reth who murdered his family is legendary. But Sebastian is done with bloodshed. For the gold, he takes one last job and is stricken to learn his mark is Selena, the same warrior who sent hundreds of Zak’reth to their graves. Now he must choose—to murder the woman who ended the war, or betray the dark forces who hired him.

You will take a voyage…

With another war looming on the horizon, Selena and Sebastian, along with a motley crew of mute sailors and criminals, demons and dragonmen, sail across Lunos; across oceans where maelstroms wrought of magic and pirates threaten at every turn, and where the seas hold secrets in their dark depths.

Old secrets thought to be as dead as the dragons who broke the world, but are coming back to life…

The Dark of the Moon is Book I in the Chronicles of Lunos saga, an epic nautical fantasy.

What do you do when an author you know for her emotional, romantic stories reveals she wrote a story under a penname in a totally different genre? You want to read it of course! Well, that’s what I do. The Dark of the Moon is the first book in the ‘Chronicles of Lunos Series’ by E.S. Bell and introduces the reader to the world of Lunos and its inhabitants. I love this book and can’t wait to find out what happens next.

“Whatever they ask of me, I won’t Summon. Never again. The price is too high.”

Selena Koren is the main character of The Dark of the Moon, and most of the story is told from her point of view. As a Paladin Selena has devoted her life to the Two-Faced God, and she serves it by healing the people on the various islands. During the last war against the Zak’reth Selena did as she was told, but it resulted in her being punished by the God and to this day she’s paying a heavy price. All she wants is her punishment is to be over, even if it means making a deal she doesn’t want to make.

“Blackness. A black crescent moon, stark on her pale skin. Not the black of a tattoo or bruise, the blackness of a shadow, a starless patch of night sky. Blackness that had depth. That breathed.”

The Dark of the Moon is not just the story of Selena finding her redemption. Yes, she and her quest are a major part, but I’ve enjoyed reading about Lunos and its rich history. Throughout the story the reader learns more about the different islands and different inhabitants, but it never feels like the author is teaching a history lesson, it all comes naturally. I know the author normally writes romantic stories, but this book is very different. There is a bit of romance, but that’s not what this story is about.

Besides reading romance books, I love watching tv-shows like Game of Thrones and movies like Lord of the Rings. I get the same feeling from The Dark of the Moon; a multi-layered story with characters who all have their own agenda, paranormal events and an outcome unknown. Well, I know what I want for Selena; getting her life back. I feel so sorry for her, I understand she did something horrible, but she doesn’t deserve the wrath of the Two-Faced God.

“Death would be a relief, she though idly. If I survive, that pain…it will be there. Waiting for me. This is the end.”

I love The Dark of the Moon, I give it 5 stars.