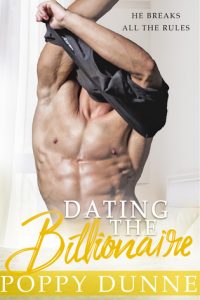 I’m Dahlia Rossi, dating coach extraordinaire. I know how to land you the man of your dreams. Follow my rules, you’ll meet the love of your life and have a gorgeous destination wedding in French Polynesia. Okay, that last one happened just the one time. But my rules work every time. I guarantee it.

1. The man makes the first move. Seems unfair? Life’s unfair.
2. Never have sex on the first date. No, not even oral. And hands above the table, please.
3. Play hard to get, but don’t make it too hard.

Solid rules, right? I thought they were. But then I met Jack Carraway, an impossibly sexy, frustratingly unpredictable billionaire, and broke them all. Everywhere. In an elevator. On a balcony. Beneath a gazebo, of all places.
Whether I like it or not (spoiler alert: I like it!), Jack is taking me on wild adventure and we’re writing a whole new set of rules. Like, always reserve your matching Harry Potter costumes a week in advance; wrestling swans is not as easy as it looks; and sometimes, the man of your dreams pops up in the most unlikely of places and has a really big…boat.

After years of watching couples find love, it may be my turn. But is this spontaneous playboy the real thing, or just a fun detour around my predictable life? All this time I’ve been following my own rules and going to sleep alone, with nothing but my second slice of princess cake to keep me company.

But the more time I spend with Jack, the more I learn that rules…they’re meant to be broken.

In love there’s only one rule: there are no rules.

Dating the Billionaire is Poppy Dunne’s third book, and tells the story of Dahlia and Jack. Like her other books this story is a funny RomCom with laughter, but also with some serious moments. I love Dahlia and her ‘rules’, and how Jack handles them (or more likely, makes Dahlia forget them).

“A good book? Same thing as a good man: never let it out of your sight, and don’t let your friend borrow it unless you want the pages to come back all crinkled and the dog to have chewed on it.”

Dahlia is the queen of planning and rules. Because she’s a wee bit chaotic by nature, Dahlia plans out every to detail to give herself (and her choatic mind) some structure. As a dating coach Dahlia is successful, and she helps her clients with her own rules. The same list of rules is also applyed to her own love-life, but so far she hasn’t found Mr. Right. Meeting Jack isn’t so much a shock, but the way he makes her break all of her rules is…

Jack is a successful and handsome entrepreneur, but on the inside he’s still a nerdy kid full of pranks. With his social status he mostly gets away with it, but Jack doesn’t always know when to stop or what the consequences of his actions might be. Jack isn’t unfamiliar with the ladies, but he instantly knows Dahlia is different.

“I feel a little more exposed than you do.” She traces her gaze down my body, landing on my pants, which are still zipped. “Being patient is a sexy quality in a woman.” I lean down over her, catching her lips in a kiss. Her tongue taps against the inside of my mouth.”

The moment Dahlia and Jack meet there’s an undeniable attraction. It’s lust, it’s hot, it’s explosive, and one night is not enough. Dahlia does her best to keep Jack at some sort of distance, because a man like him is against all of her (self-imposed) rules, but she fails miserably. Jack tries to learn Dahlia to be more relaxed, but he doesn’t ridicule her believes, he just makes her think. Of course, there’s a wee bit of drama for our couple, but that they end up together is a given fact.

As already said, Dating the Billionaire is the author’s third book, and I feel she’s getting more into her own style. I love Dahlia and Jack, and how they are written; they are realistic people with real-life reactions. Besides the main storyline there are a few more storylines. They don’t take away from Jack and Dahlia’s story, but they do make me curious. In fact, I would love to read a story about Edith and her crazy antics.

“She nestles close, laying her head across my chest. It’s just like our first night, only better. Because now, for the first time in my goddamn ridiculous, admittedly kind of awesome life, I’m in love.”

I love Dating the Billionaire, I give the story of Dahlia and Jack 4.5 stars. 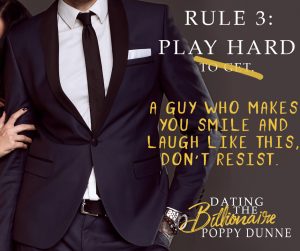