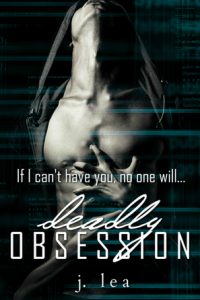 A woman with a bright future.
A man, infatuated by her beauty, determined to get her - at any cost.
And a detective, willing to risk his own life to save hers.

Sometimes, when you least expect it, fate makes an unexpected turn. But not for the better.
April Brookes finds herself in mortal danger, when a stalker enters her life. He watches her every step and makes her life a living hell.

Detective O`Rilley will do everything in his powers to find an obsessed stalker, whose sole purpose is to get April.
Will O`Rilley succeed, or will the stalker's obsession become deadly?

Long before I started to read romantic stories, thrillers, mysteries and suspense were my ‘crack’. I loved the stories, to discover with the characters what was going on in their world. When I started to read romance, soon I found the romantic-suspense subgenre. I love the romantic part of those stories, but somehow the suspense part is mostly a bit… to over-the-top? I need to stop rambling. Deadly Obsession by J. Lea. It’s my first book by this author, and it has pleasantly surprised me. I love April and Jude, and their whole story, suspense part included.

“I suddenly can’t breathe. I need air. Turning around and running outside the house, I fall to my knees on my porch. I try to fill my lungs with air. Breathe, breathe, breathe. Just breathe.”

April is a hardworking woman, who has landed her dream job as host of a tv show. She loves her job and has a great team of colleagues, but her love life is not so perfect. She has broken up with her good-for-nothing boyfriend, and since then things seem off. Her brother Max doesn’t want to wait till anything happens with his sister, so he hires a private detective to keep a close eye on her. To April’s shock Jude is no stranger to her…

Jude doesn’t do relationships. After having witnessed the problems his parents went through because of his father’s work, he has decided no woman for him. Casual hookups on the other hand give him just what he needs. When an acquaintance from college hires him to protect his younger sister, Jude isn’t happy about it, but when he finds out who he will be protecting…

“Him? Eyes, green like emeralds. Brown, silky soft hair I could run my hands through for an eternity. A sculptured body with rippling muscle. I swallow hard. No, no no. It can’t be him. But it is.”

After a passionate night with no names and contact details April and Jude went on to live their lives. Now, two years later, they are back together but under much different circumstances. April is afraid (and not without reason) for her ex-boyfriend and Jude is the one protecting her from harm. Spending so much time together makes the couple realize there’s far more between them than just a sexual chemistry. But when April’s situation takes a turn for the worse, everything between Jude and April changes.

April and Jude are a great couple with some history, but it’s not one with broken hearts and hurt feelings. While the suspense part in some romantic books make my eyes roll (sorry…), I like how all plays out in this story. It was a little twist I didn’t see coming, but it’s realistic and not too far-fetched. I love April and how she tries to deal with the whole situation. She naturally wants to be safe, but she also doesn’t want to give up her life. Jude… I think you’re a great guy… But don’t listen to that little guy in your head. What you did to April was not okay, I would have let you grovel a bit longer…

I love Deadly Obsession, I give the story of Jude and April 4.5 stars.