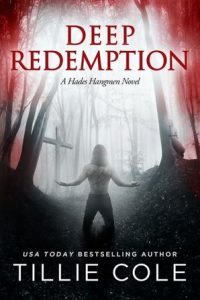 ONLY THROUGH BLOOD CAN THE DEEPEST REDEMPTION BE FOUND…

He was born to ascend.
He was destined to lead.
He was never meant to fail.

Prophet Cain lies broken and defeated on the floor of his cell. A cell he has been thrown into by the one person who was supposed to stand by his side until the end. His flesh and blood, his only companion. His beloved twin brother.
Cain has sacrificed everything for his people. He left the safety and security of his life of study to infiltrate the infamous Hades Hangmen. He lived with them, rode with them, and then betrayed them. All in the name of a faith he can now feel slipping away from him. Like everything else he once held dear…

But then his isolation is broken. Another prisoner is brought to the cell next to his. A woman fighting her own demons and fears. A woman who Cain understands needs him, as he needs her.

As the connection between them grows, so does Cain’s resolve. He will right the wrongs he has done. He will atone for the evil acts carried out in his name. He will save the one he loves…
… Even if the battle takes him to the gates of hell itself.

One of my favorite MC series is ‘The Hades Hangmen Series’ by Tillie Cole. Given the shared past of the heroines of the books, it isn’t a series for the faint of heart; horrific deeds are done to innocent girls. One of the side characters in the previous books is Cain aka Rider, who played a dubious role throughout the stories. With Deep Redemption we finally get his story, and it’s just a tragic in its own way.

“Rider pretended to be a Hangman, but always stood on the outside, looking in. Cain pretended he was a prophet, outwardly faking strength, yet drowning in fear underneath. But if both of these men were a ruse, then who the hell was I? Who was the real me? I had absolutely no idea.”

Cain is born into The Order and doesn’t know another life. Being the heir to Prophet David, he – together with his twin brother, Judah – is raised in seclusion, far away from The Order to remain pure. When The Order runs into problems with the Hades Hangmen, the decision is made for Cain to infiltrate in the MC, to gather necessary information. As Rider, Cain lives and works with the MC, something so very different from the isolated life he’s known. Cain is torn by the beliefs he’s been taught since birth, and what he has seen with his own eyes. Meeting Harmony at one of his darkest moments makes Cain want to fight again, for her and for himself.

“My heart tore at the sadness in her voice. My throat clogged at her compassion. This is what this feels like, I thought. This is what affection was—unbarred, unforced… natural. No coercion. No panic. Just freely given.”

Harmony is a member of The Order, but has lived in a small commune in Puerto Rico. However, since the events from the previous books, all members are moved back to New Zion, to live there. Living far away from New Zion has protected Harmony so far, but she has run out of luck; because of her great beauty she’s immediately suspected of being a ‘Cursed One’. Shortly after arriving at New Zion, Harmony meets Cain, and it doesn’t take long before she falls deeply for the broken man, even though she knows she can’t have him.

“He had called me beautiful, but I could only think the same about him. His brown eyes and long dark hair were mesmerizing. His body was built to protect—hard and strong. But what I loved most when I looked into his gaze was the kindness it held.”

Cain and Harmony are both products of their upbringing; living by the rules of a religious order, rules that are cruel and dictate their thoughts and believes. Given their desperate situation, it isn’t a surprise they fall hard and fast for each other. Not knowing what the future will bring, Harmony and Cain feel an instant connection, and give into their feelings within the close boundaries they get. Them wanting to be together is a given fact, it’s the forces beyond their control which can destroy their happiness.

Just like in the other Hangmen books, my heart broke for Harmony, but this time also for Cain. Both are victims of a cruel cult; they didn’t chose this life. Throughout the previous books in the series, I already had my suspicions about The Order, but Deep Redemption reveals the truth about its ‘religion’ and its sick and cruel leaders. I feel so sorry for the children and vulnerable adults caught up in the twisted web of lies preached by the men they blindly trust.

Cain is a wonderful and damaged man, not only on the outside. I loved how he was with Harmony, how her future and freedom was everything to him. He wanted her to have it all, even if it means sacrifices on his part. The other brave people in this book are for me Harmony and the women from the three previous books; Mae, Lilah, and Maddie. They were the better ones, the ones who chose love and forgiveness. I was so angry with the men. I get that they’re part of a violent MC, that they have a certain code of honor, but still they could have listened to their hearts.

“I only let myself feel the beautiful woman in my arms. The woman that won my heart through a wall of stone. The one that fought for me with an unrivaled intensity… and one I would die to protect. I focused solely on the moment, letting the past drift away. Because only this was important. No religion, no duty, no club… just us. Just her.”

I love Deep Redemption, plain and simple. I give this story 4.5 stars, and I can’t wait for AK and Phebe’s book.

~~ Deep Redemption was provided in exchange for an honest review ~~