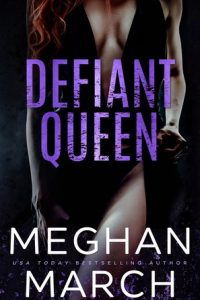 I’m his entertainment. His toy. Payment on a debt.
I tell myself I hate him, but every time he walks into the room, my body betrays me. How can I want him and fear him in the same moment?
They told me he’d mess with my head. Make it go to war with my body.
But I didn’t realize it would be complete anarchy.
I should’ve known better. When Mount’s involved, there are no rules.
I will not surrender. I will not show weakness. I’ll stand my ground and make it out of this bargain with my heart and soul intact.
But he has other plans . . .

Defiant Queen is the second book of the Mount Trilogy. Mount and Keira's story concludes in Sinful Empire.

After the ending of Ruthless King, I needed Defiant Queen for all the answers I had. Luckily, I didn’t have to wait that long, and Meghan March is sweet enough to give a few explanations early in the book. I love this sequel to Keira and Lachlan’s story!

“Sated, defeated, yet defiant. Every time I think I have her figured out, I realize none of my normal barometers apply when it comes to Keira Kilgore. She’s the exception to everything I thought I knew.”

Keira is a mess after the ending of the previous book; she’s hurt, angry and feels betrayed. And given what happened, I don’t blame her at all. She’s mad at Lachlan, but at the same time she knows she has some feelings for him. And that combination confuses her to no end. Does she want to kill him, or does she want to do other things to him?

Lachlan was a mystery in Ruthless King, but in part two of the story we see more of the real him. Not only the ruthless bastard he can be when you’re on his bad side, but also a much more normal guy, someone you can see Keira fall for. And even though it’s hard for him to admit, Lachlan is falling for Keira as well.

“In that moment, I realize the game Mount is playing with me is more dangerous than he knows, because I just gained the advantage. I almost brought the most powerful and feared man in this city to his knees, and I can’t wait to do it again.”

Lachlan, Lachlan, Lachlan… How do I feel about you? To be honest, if my sister or a friend falls in love with the guy he was in book 1, I would tell her to run away as hard as she can. But now he’s growing on me. He’s still a dangerous man, but the more time he spends with Keira, the more human he gets. Keira is still the feisty redhead who’s passionate about her whiskey distillery and who is getting to know Lachlan and the world he lives in. But she doesn’t take it for granted, she keeps asking questions and fights him wherever she can. I love the two of them together, and after the ending of this book I can’t wait for Sinful Empire.

“I see Keira Kilgore exactly for what she’s becoming—the one woman who might be strong enough to stand by my side and rule an empire.” 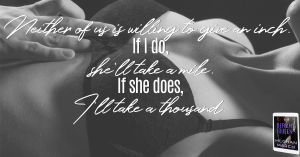