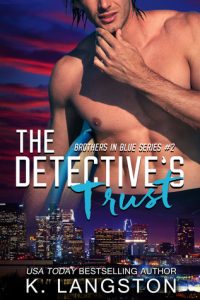 EACH HOLDING A DIFFERENT BADGE OF THE LAW

EACH SWORN TO SERVE AND PROTECT

trust; firm belief in the reliability, truth, ability, or strength of someone or something.

LAPD Detective Reid Cunningham is content to keep the pain of losing his best friend buried deep. Dedicated to his job, he doesn’t have time to feel.

But when the past comes knocking at his door, he has no choice but to face his deepest and darkest fear.

Cassidy Sky, his best friend’s little sister, needs his help. Reid promised to watch over her and keep her safe, but he never planned on giving her his heart.

“I’d noticed the way she looked at me sometimes, when she thought I wasn’t paying attention. Much like the way she was looking at me now. With the need and want of a woman, not a little girl. And I’d never felt anything but a brotherly love for her in return. Until now. Until this very moment.”

Reid and Cassidy have known each other for a long time. Reid was best friends with Bodie, Cassidy’s older brother. The boys spend much time together, and Cassidy was always around. But while Cassidy developed a sweet, innocent crush on Reid, he kept her firmly in the ‘best friend’s little sister’ category. When Bodie dies, everything changes. Reid leaves and Cassidy is left behind to deal with her grief by herself. Five years later, Cassidy gets a message from a ghost of the past, and even though he left, she runs to Reid for help.

“Reid. My throat burned as tears pricked my eyes, thinking about the man who still owned my heart. The man who had staked claim to it without even knowing.”

Reid has always thought of Cassidy like a little sister. Well, that’s not totally true. During her teenage years, Reid has seen Cassidy change from a little girl into a beautiful 16-year-old. A pretty girl he shouldn’t have feelings for. Even after he sees her after five years, and Bodie is dead and gone, Reid still feels like he can’t go there. Cassidy has had feelings for Reid for a long time, and she knows he will help her with the problem of the past. Since this is a romance book, Cassidy and Reid dance around each other for a bit, but that they will happen is inevitable. The couple has a serious issue to deal with, not between the two of them, but outside forces create a lot of drama.

I’m not very familiar with K. Langston and her writing (I did read Unlawful Justice she co-wrote with K.C. Lynn), but I really enjoyed The Detective’s Trust. I like the author’s writing style and the way she writes her characters. Yes, I’ve read numerous stories about ‘falling for the sibling’s best friend’, but the story of Reid and Cassidy as a whole keeps this book interesting. Since this is only the second book in ‘the Brothers in Blue series’, I’m curious for the future books.

“I’ll take care of you, Gidge. We’ll have a good life, trust me.” I held him close and had no doubt that our life was going to be better than good. As long as we had each other, we had everything.”

I’ve enjoyed reading The Detective’s Trust, I give this story 4 stars. 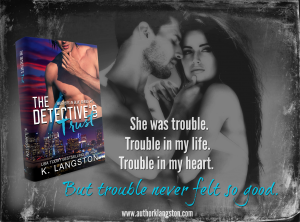 We’d only been on the road for half an hour but you could cut the tension with a knife. To think when I woke up this morning, I was completely high on this man, but right now I wanted to choke the shit out of him.

I learned pretty quickly that Reid Cunningham was not a morning person. He needed at least two cups of coffee before he should be allowed to interact with humans.

Plus, I was pretty sure he was still pissed about what I was wearing. He’d asked me twice to change before we left the hotel, but I’d refused and that didn’t help his extreme level of grouchiness whatsoever. But I could care less how he felt about my attire. If the only words he was going to utter to me were demands then he could go straight to hell.

I didn’t see what the big deal was. It was just a romper. When I left Florida for California, I’d packed light—sundresses and rompers. Cute and comfy. That was my style. I’d brought along a denim jacket to ward off any chill but it wasn’t necessary. Just being in the same car with him made me hot.

And not in a good way.

I wasn’t sure which part he hated the most. The ruffled eyelet hem that grazed my upper thighs or the top half, which was low-cut with spaghetti straps. My breasts were small enough I didn’t have to wear a bra. The anger in his eyes only intensified when his eyes drifted to either. Sure, it showed a lot of skin, but I wanted him to look.

I wanted him to eat his stubborn heart out.

I wanted him to regret the way he treated me this morning when we woke up. He’d given me the cold shoulder, only giving me short, one-word answers, and even though I’d asked twice more, he still wouldn’t tell me why the hell we were driving all the way to Texas.

“Are you going to be like this all day?”

He muttered under his breath before pulling over on the side of the road and getting out of the car. I watched him pace back and forth before I unbuckled my seatbelt and opened the door.

I’d barely made it out when he snapped. “Get back in the car.”

Slamming the door, I walked toward him. “No, I want to know what your problem is.”

“Nothing. Get your ass back in the car. Now.”

“Stop barking orders at me. I’m not a fucking dog.”

He stopped pacing and fixed his eyes on me. “I do not treat you like a dog.”

“Yes, you do. You ordered me to change clothes. You won’t tell me why we’re going to Texas. You just expect me to do whatever the hell you say. And you won’t talk to me about last night.”

“There’s nothing to talk about.”

“We spent the night together.”

He exhaled a long, frustrated sigh, dragging the palm of his hand through his hair. “I told you before, the only thing I can offer you is protection.”

“The asshole who acts like an asshole because he thinks he’s not worthy enough, has too many demons to battle, and feels the need to fight them alone.”

“You hit the nail on the head, baby. I’m exactly that guy. And I’m going to lay it all out for you, I’m not the guy for you.”

He narrowed his eyes. “Listen, I’m not trying to be a dick.”

“Too late for that,” I tossed out, folding my arms across my chest.

“You’re not being honest. You want me; you’re just too chickenshit to admit it.”

“Get in the damn car,” he said, stalking toward it. “I’m tired of arguing with you on the side of the damn road.”

“God, why do you have to be such an asshole?”

“Why do you have to be so goddamn beautiful?”

He didn’t mean to say it. I could tell by the shocked expression that slipped over his face, but he’d admitted it all the same.

I blinked. “You think I’m beautiful?”

He shook his head, a faint smile tugging at the corner of his lips. “You’re such a brat, you know that?”

I smiled. “But a beautiful brat?”

“Get your beautiful, bratty ass in the car. Please.”

Once inside, he blew out a heavy breath and fixed his eyes on mine. “I do want you. More than I’ve ever wanted anyone, but I would only hurt you, Cass. I—I can’t be what you need.”