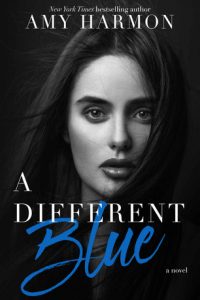 Blue Echohawk doesn't know who she is. She doesn't know her real name or when she was born. Abandoned at two and raised by a drifter, she didn't attend school until she was ten years old. At nineteen, when most kids her age are attending college or moving on with life, she is just a senior in high school. With no mother, no father, no faith, and no future, Blue Echohawk is a difficult student, to say the least. Tough, hard and overtly sexy, she is the complete opposite of the young British teacher who decides he is up for the challenge, and takes the troublemaker under his wing.

A Different Blue is one of Amy Harmon’s older books (originally published in 2013), but it’s re-published with bonus content. Like other books by this author it’s beautiful written with relatable characters and gripping moments, I love it.

“Just like trash. And no amount of pretending I wasn’t trash would make me something else. Girls like me deserve their reputations.”

Blue had a happy childhood, but it was far from conventional. She grew up with Jimmy, a drifter, and as a result she started school when she was already 10. Being older and different than her classmates, Blue develops the persona of a bit hard girl, always ready to do what she wants. She’s is a pretty girl, and she uses her looks to get attention from the guys at school. Blue knows how people think of her, but she doesn’t care. The real Blue however is artistic and feels lonely; she often wonders about her roots, and how she ended up with Jimmy.

“My eyes were glued on our clasped hands, our fingers lying side by side. I couldn’t look at him. Not when the words he spoke were so intensely personal that the glare from the truth hurt my eyes.”

Being the school party-girl, Blue doesn’t have many friends or people she can confide in. Against the odds she forms some sort of friendship with Wilson, her History teacher. She pretends she’s doesn’t like his classes, but he makes her think and wonder about her own past. When Blue needs help it’s Wilson who reaches out, but they are just friends, nothing more. Throughout the story that changes. There are feelings between Blue and Wilson but they don’t act on it. Circumstances keep them apart, but it’s inevitable something will happen between the two of them.

A Different Blue is not just the story of Blue finding her man, above all this is the story of Blue finding her true self and where she comes from. Before I started this book, I thought it would be a somewhat forbidden love story, but it isn’t like that at all. Wilson is a wonderful guy who has to figure out some things on his own, and I love Tiffa, his sister. While it’s not the typical romantic story I normally read, I love Blue and the journey she makes.

“You’re not alone anymore. You’re not lost anymore. And I don’t want to wait anymore.” There was no question in his tone. No plea. It was a statement. A declaration.”

I love A Different Blue, I give Blue’s story 5 stars.