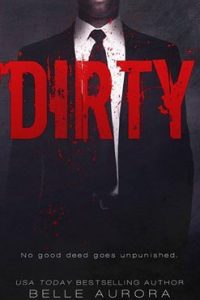 My marriage seemed perfect from the outside looking in.
People envied me. They wanted my life, wanted to be me.

They had no idea of the horrors that lurked behind closed doors.
They didn't know I was at the lowest point a person could reach.

He saved me.
I screwed him over.

Now everybody was after me. My life was forfeit.
It was only a matter of time. I was a dead woman walking.

The question was, who would get to me first?

“This life of ours is not normal. This life is dirty. The thing is, no matter how hard my father tried to raise me to be good, I never intended on staying clean.”

Alejandra has grown up in a mafia family, protected and sheltered from the outside world. She has always known marrying out of love wasn’t an option, getting to know her future husband Dino makes her less nervous. At least he’s friendly and kind, more than she could have hoped for. But a few months into the marriage Dino shows his true, psychotic face. And that’s what Alejandra has to endure for six long years; being married to a real monster, becoming a master at pretending everything is all right. When Julius shows up at her father’s mansion, Alejandra sees her way out.

“This life of ours is not normal. This life is dirty. The thing is, no matter how hard my father tried to raise me to be good, I never intended on staying clean.”

Julius is a dangerous man. Events from his childhood and teenage years have shaped him into the man he is today; lethal, loyal and straightforward. Losing Twitch hasn’t been easy on him; he wasn’t just a business partner he spends his working days with. When Julius gets involved with two ruthless mafia families he didn’t count on a beautiful, fragile woman with some sort of death wish.

“Being here, with Julius, like this, has become the most raw experience I’ve had in my entire life. A life changing experience. He looks into me and I return it, full force. No words are spoken. None are needed, not now.”

Despite the circumstances they meet in, Alejandra and Julius are attracted to each other. Alejandra is surprised she even can feel for something for a man after what her husband did to her. Julius quickly learns there’s much more to Alejandra. Yes, she’s hurt and needs to recover, but when he learns the true horror of her ordeal he all he can is admire her. Falling for each other in the middle of a mafia war isn’t wise, and hard decisions have to be made. Julius and Alejandra are a great couple, but there are so many forces beyond their control.

What a story. Like Raw, Dirty is gritty, brutal and not kind to its characters. I feel so sorry for Alejandra and what she had to endure. Being so innocent and protected she was no match for her husband and his depravity. But, even though her body was broken and scarred, her spirit isn’t. When she sees her way out, she takes the opportunity without a second thought. Julius is the brutal man we know from Raw, but Dirty gives a closer look at him; it gives a background to his actions and way of thinking. I like him. The secondary storyline throughout the book, the major twist/betrayal and the epilogue.. I can’t wait for the third book, bring it on!

“The expectation of love versus the reality is two completely different things. The expectation is that it’s all hearts and roses and feelings of warmth, kisses and long-lasting embraces filled with hope that life will be forever beautiful. But beauty doesn’t last. Never does. Even roses have thorns.”

I love Dirty, plain and simple. I give this story 5 stars.