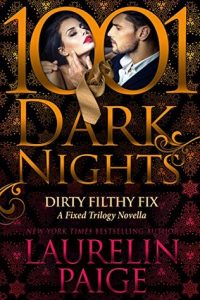 I like sex. Kinky sex. The kinkier the better.

Every day, it’s all I think about as I serve coffee and hand out business agendas to men who have no idea I’m not the prim proper girl they think I am.

With a day job as the secretary to one of New York’s most powerful men, Hudson Pierce, I have to keep my double life quiet. As long as I do, it’s not a problem.

Enter: Nathan Sinclair. Tall, dark and handsome doesn’t come close to describing how hot he is. And that’s with his clothes on. But after a dirty, filthy rendezvous, I accept that if we ever see each other again, he’ll walk right by my desk on his way to see my boss without recognizing me.

Only, that’s not what happens. Not the first time I see him after the party. Or the next time. Or the time after that. And as much as I try to stop it, my two worlds are crashing into each other, putting my job and my reputation at risk.

And all I can think about is Nathan Sinclair.

All I can think about is getting just one more dirty, filthy fix.

What if you have a different view on relationships? What do you do when you meet a special guy? Dirty Filthy Fix tells the story of Trish, who doesn’t do traditional. Meeting Nathan however makes her wonder.

“The stranger whose lips were just full enough to nibble on… Fuck, he was so damn hot. And I was entranced. Because he wanted me.”

Trish pretty much lives for her work, but during the weekends she gets to indulge. Being a member of an exclusive club gives her the kinky sex she wants, an escape from the real world she very much enjoys. Trish has always known she’s different, she doesn’t seek a life partner, but Nathan makes her question a few of her rules.

Dirty Filthy Fix is a standalone novella in the ‘1001 Dark Night Series’, and is connected to the ‘Fixed Series’, you might recognize Trish as Hudson’s secretary. The story is told from Trish’s POV, and although it’s short, it feels like a complete story. Like other books by Laurelin Paige the writing keeps you captivated from page 1.

I love Trish, she’s an independent woman who knows what she wants and takes it without holding back. Her kink is not my thing (reading about it is something else…), but I admire how she embraces her lifestyle, and doesn’t care about the opinion of other people. Nate though is different, and is interesting to see Trish’s reaction to him. I love the ending of the story, it’s very fitting for this couple.

“My kiss was gentle, reverent. Pleading. It was a kiss that asked. A kiss that negotiated. A kiss that split the difference between his wants and mine, without even saying a word.”

I’ve enjoyed Dirty Filthy Fix, I give it 4.5 stars. 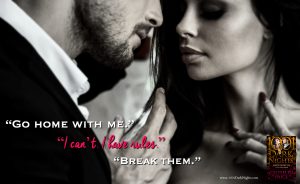 “I’d like a try.” It was the stranger with the green eyes.

Of course the night would ramp up right when I announced I was leaving. I looked up at him expectantly, but he didn’t approach. I realized he was waiting for my invitation. He was definitely new. Everyone else knew Miss T was one of the most ready and willing participants in the room—to the point where some tried to take advantage of it. I never needed to issue invitations, but I often needed to reinforce boundaries.

“What are you waiting for, then?” I sat up straighter, ignoring Chuck’s grunt of complaint.

The stranger came forward with slow, swaggering steps. When he reached me, he loosened his bowtie a little before lowering himself to one knee at my side. He placed his arm next to mine on the chair, his fingers barely grazing my skin. Goosebumps sprouted up my forearm all the way to my neck, and he hadn’t even bent in to whisper yet.

And then he did. His breath skated over the shell of my ear, and my heart tripped unexpectedly in my chest.

How long had it been since that had happened from just the feel of someone breathing against me?

“I’m going to kiss you one way or another tonight,” he said, low and with such surety a shiver ran down my spine. “It’s your decision whether it’s now or later.”

So. Not just a voyeur then.

Why was this man so different?

Maybe it was because those other men always looked everywhere in the room. When their eyes landed on me, I knew I was just one of many options.

He’d looked around the room. I’d watched him throughout the night. But nothing had interested him. I could tell by the way he was still wearing his jacket, by the way his eyes were only now beginning to dilate as they stared into mine.

He’d studied the room and decided nothing here had interested him but me.

That was definitely not the kink that usually got me off. That was Cinderella-story kind of kink. The fairytale kink with a happy ending was traditional, but a kink all the same—being chased. Being placed on a gilded pedestal. I never wanted to be somebody’s Only One in the Room. I liked having my own space. I liked being able to disappear when I wanted. I liked not having chains or boundaries. I was turning thirty-five soon. I wasn’t a starry-eyed teenager anymore. I knew what I wanted from life and love and relationships and sex. And it wasn’t a pedestal.