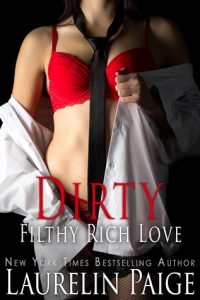 Even after knowing what I know now, I still want to talk to him, to touch him. But there’s an ocean between us, and I’m not sure it can be crossed with something as easy as a phone call or a plane ride.

Yet I’m willing to try.

He doesn’t know this yet, but this time I’m the one with the power. And maybe – just maybe – if the air were cleared and all our secrets bared, there could still be a chance for us.

And this dirty, filthy thing between us might end up being love after all.

Lust or Love? Dirty Filthy Rich Love starts where the previous book of the duet ended; with a confused/angry Sabrina and Donovan gone. Sabrina isn’t sure about her feelings for the man, and with the revelations at the end of the previous book, she doesn’t know what make of him either. I felt the same way as her, but I love how all played out.

“Walking toward him was like deciding to walk through fire when I was already covered with first-degree burns. It hurt like I couldn’t describe. But I was a girl who lived in darkness.”

While being apart, Sabrina has a lot to think about. About what happened between her and Donovan, but more importantly about the impact he had – and still has – on her life. Being in the same city again doesn’t change a thing, but at least Sabrina and Donovan are sort of together. Their chemistry is a given fact, but they have to deal with a lot of issues before they can be a real couple.

Like the previous two books, Dirty Filthy Rich Love is told from Sabrina’s POV, giving an insight to her thoughts, feelings and doubts. Donovan on the other hand remains a bit of a mystery; he explains his actions, but you can’t help but wondering if there’s more. Throughout the story new characters are introduced, and I’m curious to see if they’ll get an own book or novella. I certainly hope so.

I don’t know what I would have done standing in Sabrina’s shoes. Donovan’s past actions might be normal for him, but to be honest, it would have freaked me out. Luckily for him Sabrina is a whole lot more forgiving, but even she needs to come to terms with the whole situation. I love their appetite for filthy, dark sex, but I also love to see them as a normal couple, building towards a future and a life together.

“I want you with me to keep you safe, yes, but also because I want you in every part of my world. I want it to be our world.” “I always wanted to be in your world,” I said, nodding. I was saying yes. “Sabrina, you are my world.”

Dirty Filthy Rich Love is the perfect conclusion to the Dirty Duet. I give this story 4.5 stars.

You can read the prologue here 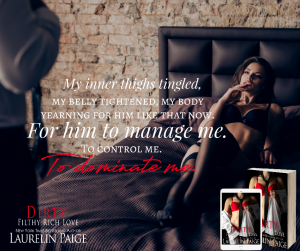