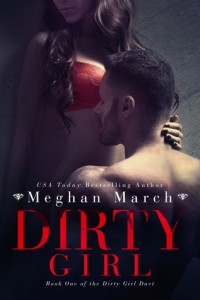 No man in his right mind would answer that ad. Except thousands did.

My name is Greer Karas, and I should never be allowed near another bottle of booze again. Because when I drink, my friend and I do stupid things. Like take a page out of my older brother Creighton’s playbook and post something completely asinine on the Internet. Waking up with a giant hangover to find my humiliating personal ad has gone viral is not my finest moment.

Cue my look of shock when one of Hollywood’s hottest new bad boys, Cavanaugh Westman, comes knocking at my door and drops his pants to prove that he does indeed have a giant cock. What he doesn’t have is an explanation for why he disappeared from my life without a word three years ago, only to show up on the big screen two years later, killing bad guys in action flicks.

Now he wants me again.

What the hell do I do now?

“Have you ever done something you know is a bad idea, but you’re being egged on by your best friend, and the heat of liquor pooling in your belly destroys any concern about potential consequences?”

Greer Karas has caught her boyfriend in the act with another woman. And what does she do? She gets very drunk with a friend and posts a very clear and trashy ad online, to get back at the guy. To Greer’s disbelieve the ad goes viral and gives her all sorts of problems at work, with the tabloids and with her older brother. Greer however has written the ad with a specific man in mind, Cav Westman, a guy she used to know but who disappeared from her life three years ago after she made a move on him. To her surprise, it doesn’t take long before she finds said Cav on her doorstep.

“What are you doing here?” I whisper, reminding myself that I no longer have some naive fantasy of being the one for Cav. His gaze returns to my face, and I know his inspection of me can’t be nearly as flattering as mine of him. I’m waiting for him to say something … anything.”

Cav Westman is Hollywood’s new action hero. As the new it guy he’s worshiped by countless women and men want to be him. Three years ago he knew a sweet young girl, but he did his best to keep a distance between them, to not get involved. Her being the younger sister of an infamous billionaire made him think he wasn’t worthy of her. When he sees her bold ad online – and just knows it’s meant for him – he immediately makes the decision to pay her a visit.

“Mine. The taste of Greer on my lips and her body in my hands unleashes a wave of primal possessiveness. She’s not the girl who got away; she’s the one I walked away from. Life doesn’t always give us second chances, but this one is mine and I’m taking it. And her.”

Three years ago Greer and Cav spend time together, were into each other but didn’t act on it. Greer wanted to, but Cav kept a safe distance between them. When they meet again, the chemistry they had is still there and finally, Cav doesn’t hold back. Feeling he can be with a girl like Greer now, Cave gives into his feelings at last. Together Greer and Cav are hot, they have great chemistry and it turns out Cav has a dominant side to him.

Besides spending a lot of time together in and outside the bedroom, Greer and Cav have to deal with the aftermath of Greer’s ad; the paparazzi can’t get enough of Greer’s ‘mistake’ and her brother Creighton isn’t very happy with the situation. Do Greer and Cav have their Happily Ever After? No, not yet, since this is the first part in ‘the Dirty Girl Duet’. The book ends with a cliffhanger revealing a very unsuspected twist, I can’t wait for the second book, Dirty Love.

“No man has ever made me feel this sexy. Tonight, there are no boundaries. Nothing is off-limits. I want him to take everything he wants from me because I’m dying for it too.”

Dirty Girl is written in the same pleasant writing style as other books by Meghan March, I’ve really enjoyed it. I give this story 4 stars.

~~ Dirty Girl was provided in exchange for an honest review ~~ 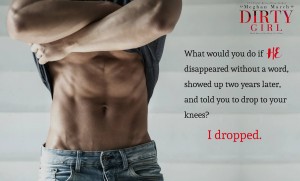 Can you photoshop real life? Because that’s the only way I can possibly be seeing through my peephole what I’m seeing right now.

Cavanaugh Westman. In the flesh. Outside my door.

The knock stopped me mid-shuffle on the way to my coffeemaker. So that makes me an uncaffeinated, makeup-less, messy-bunned, legging-wearing couch surfer who hasn’t showered in the two days I’ve spent holed up in my apartment.

I’ve had so many fantasies of how it will go when I finally came face-to-face with Cav again. I’ll be wearing something sexy, yet classy. Perfect hair, makeup, eyebrows. I’ll adopt a casually disinterested mien. He’ll be devastated when he realizes what he missed out on by standing me up that night and disappearing without a word.

There’s no way in hell I’m answering that door. Cav Westman can sit out in my hallway all day. Not opening it.

But Cav reads my mind, the bastard.

“Open the door, baby girl. Your message came through loud and clear with that ad.”

“That’s right, I know you’re standing there. So, open the door, Greer.”

His deep, gravelly voice stirs memories I thought I wiped out of my brain. Apparently not.

I rush to the couch to grab my phone. I need to text Banner. Need to freak out with her and schedule an emergency spa day so I can be all the things I need to be before facing him again.

My thoughts come to a screeching halt. I do not need to impress Cav Westman. He’s nothing to me. And I can prove it right now by opening the door. He’ll see exactly how much I don’t care about his opinion.

Before I can change my mind, or look down at my shirt to make sure I’m not sporting any stains from yesterday’s coffee, I reach for the dead bolts and unlock them before I twist the doorknob and tug.

As soon as the door is open, I know I’ve made a terrible mistake.

Through the peephole, he was marginally distorted. On the billboards and movie posters plastered to the sides of buses in the city, he looked like a total stranger. But Cav in the flesh?

I lose my grip on the door and it swings open.

How does he not look older? No new lines bracket his mouth or crease the corners of his eyes. Instead, a new scar curves along his jaw, giving him a sexier, more dangerous look. His shoulders are impossibly broader, making his hips seem even narrower.

His hazel eyes flash as he takes me in—at least they haven’t changed. Today they’re more tawny gold than gray or green. Guessing what color they would be was part of the game I played with myself before. His dark brown hair is sexy and disheveled, longer than the buzz cut he had before, but everything else is the same. Worn jeans, a plain T-shirt, and scuffed boots. Strong, bold features that many a man would find impossible to carry off, but are the reason millions of women would line up to have Cavanaugh Westman’s babies.

“What are you doing here?” I whisper, reminding myself that I no longer have some naive fantasy of being the one for Cav.

His gaze returns to my face, and I know his inspection of me can’t be nearly as flattering as mine of him.

I’m waiting for him to say something . . . anything. Like an apology or an explanation for disappearing three years ago, but instead I get something completely different.

His hands drop to the button of his jeans. “Based on your ad, the inspection isn’t quite complete.”

If my jaw could drop to the floor like a cartoon character’s, it would.

Oh. My. God. I never saw what he was packing before, only a grazing handful the one night I finally got bold, but he put me off, promising me a night that never happened.

I stand like a slack-jawed moron and force my gaze to his face.

“What are you doing?”

His wicked grin—one he uses so rarely, even in the movies of his I’ll never admit I’ve seen—wipes away the three years between our past and present.

The hiss of the zipper comes next.

I keep my gaze on his face as his eyes dare me. To look or to stop him, I’m not sure which.

The endearment on his lips brings back another wave of memories, but the flex of his bicep against the sleeve of his T-shirt steals my attention.

He’s gripping his cock, stroking it, isn’t he? All I have to do is look down, and I’ll have more than one question answered.

“You know you wanna look.”

The dare is there again. And he’s right. I want to look. So I do.

Well, let’s just say Cav knocked that requirement out of the park. The sight of his long, thick cock in his big, capable hand sends heat rushing south through my body, pooling between my thighs. My nipples, sans bra, strain against the material of my shirt. Cav’s gaze drops as well—to my chest.

The room pulses with a desperate intensity. Hanging between us is the night we never had. The one he walked away from.

I have two choices. Take what I want, what I asked for, or hold on to the rejection he dealt me three years ago.

My brain short-circuits on one thought—life is short, and you never know if you’ll get a second chance.

So I step forward, wrap one hand around his neck and the other around his cock, and kiss him for everything I’m worth.