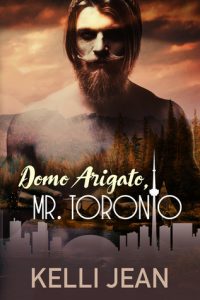 Just when environmental scientist Dr. Emery Bradford’s globe-trotting days seem to be winding down, she heads to Canada to help a sexy, bearded park warden, Julian Michael Jensen, investigate the unnatural wildlife and their deaths in the Algonquin Provincial Park.

The moment Julian and Emery meet, heated fireworks ignite, and keeping on task proves to be challenging as they battle their desire for one another. However, they have an important job to do that requires discretion and focus because what’s hidden in the forest threatens not only the wildlife, but possibly also their very survival, but new obstacles start to present themselves behind every rock and tree.

Can they hold on to their intensely growing attraction for each other while attempting to save Algonquin Provincial Park? Or will running for their lives destroy everything they are fighting for?

I know Kelli Jean for her ‘Ten Thousand Series’, each book a bit darker than the previous book in the series. Domo Arigato, Mr. Toronto is the authors newest book, it’s a standalone and very different from her other books I’ve read. It still contains serious topics, but overall, it’s much lighter and friendlier. Of course, the Hero still wears a beard…

Emery is a 31-year-old environmental scientist who has traveled all over the world for her work, and because she loves to travel. When a friend calls in a favor to help at a Provincial Park, Emery agrees to help, not only for the work, but also because she’s curious about the park’s warden. Canada is only meant to be a quick stopover, but soon Emery discovers something very serious is destroying the wildlife. Her growing attraction to Julian – the park’s warden – isn’t helping either.

“Out of nowhere, Julian Michael Jensen actually walked out of my head and into the coffee shop. Like a derp, my jaw dropped, and I stared at him in all of his—holy crap, he’s at least six feet tall—blond, inked, and bearded glory.”

Julian works as a conservationist and warden in Algonquin Provincial Park, Canada. His work is his life; he’s passionate about what he does, the wilderness and its inhabitants mean a lot to him. Julian has some good friends where he works and lives, but women are a bit of scarce in the wilderness. When he discovers Emery is the scientist who comes to help him with his investigation, he’s a bit surprised. He was expecting a man, but instead he gets a beautiful, tempting woman.

“I did my best to ignore her. I had to. Because she was the cutest woman I’d ever come across in my thirty-three years, and what I wanted to do more than anything was haul her back to my bedroom for a few hours. Days. Weeks. However long it would take to get her out of my system.”

After an awkward first meeting, Emery and Julian talk it out it and start to focus on much more serious issues; the huge animal death in Algonquin Provincial Park. Since not everybody will be happy with an investigation, Julian and Emery need to keep their research under the radar, so for the first part of the journey, it will be just them. Traveling through the park under primitive circumstances brings the couple closer together, and not giving in to their attraction is no option. Both Emery and Julian haven’t been serious with a partner in a long time, so it’s not strange communication is a bit of an issue…

From time to time I enjoy watching reality shows about gold diggers in remote areas (well, hubby enjoys those series and I watch with him). I always wonder how these guys are with women… Julian is such an outdoor man and I really like him. He knows what he wants, but he’s a bit rough around the edges. Emery is a kick-ass woman, independent to the bone, but looking for a place (and a man) to settle down. Domo Arigato, Mr. Toronto is a bit different from the other books I know by this author, but it’s a well written story. Although Emery and Julian deal with some serious matters concerning the environment, the developing feelings between them feel realistic.

“I was here with him; he was here, inside me, a part of me once more. That wondrous feeling of homecoming wrapped itself around my heart and soul and hugged me tight. “Julian,” I whispered.”

I love Domo Arigato, Mr. Toronto. I give Emery, Julian and their story 4.5 stars. 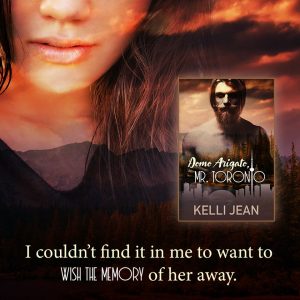