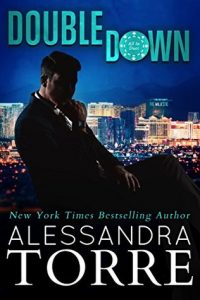 In Vegas, there was one man who was off limits. One man… and I fell for him.

I knew there were risks. Still, I played the game. When Dario Capece called, I answered. When he beckoned, I came. When he broke all my rules, I looked the other way.

I knew there were risks. I just never realized they included death.

Double Down picks up right where the first book in the Duet, Even Money, left off. And given how Even Money ended, you know this book won’t be an easy ride. But for Dario and Bell, it’s a fitting story; it fits with the dangerous world Dario lives in. I’ve enjoyed this roller-coaster read very much.

“I wasn’t wrong. I was in a horrible mess with a man I couldn’t seem to connect with, but I loved him. And he, somewhere among that cold indifference, loved me. I had to believe that.”

The events from the previous book have left Bell and Dario in an unsure place. Yes, they have feelings for each other, but they can’t be open about it. They even have to spend some time apart, which makes Bell question her relationship with Dario, and what everything means. Dario however is sure about Bell, but he needs to deal with the very messy situation first, whatever it takes.

“So beautiful. So strong. His. He would learn. He’d learn to love her without restraint, without the fear of evil lurking, without the many facades and lies. She was his future.”

Bell is in over her head. Yes, Dario is the man of her dreams, but his background and not-so-legal dealings are not her thing. Her feelings for him however don’t change, so she accepts all of him. Dario is a rough spot. He wants to do the right thing, but he also wants to get to know more of Bell and simply be with her. I love this complicated couple.

Double Down is the second part of the ‘All In Duet’, and it’s one action-filled story with a lot of twists and turns. Most of the book is told through the eyes of Bell and Dario, but also some of the other characters get their say. This gives a bigger glimpse into Dario’s dark world, and all you want for him is to succeed even more. Double Down is the perfect conclusion to Bell and Dario’s story and I love the ending.

“Underneath my palm beat a heart that loved more fiercely than I thought possible. A heart that protected those he loved and spoiled me with every beat and chance.”