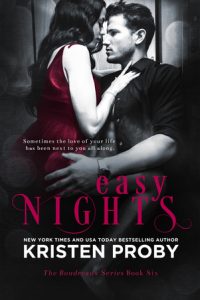 No one said change was easy…

Savannah Boudreaux knows what it is to hurt. To bleed. To be afraid that the man she’s promised to be true to until “death do us part” might in fact separate them far sooner than anyone had ever anticipated. But Van also knows what it is to survive. To move on. To live life to the fullest. With five brothers and sisters and a loving mother as her constant source of strength during the pain and the healing, Van realizes there is little else she needs.

But some things never change…

Benjamin Preston sat on the sidelines of the Boudreaux family for years, in love with a woman he couldn’t have. As the best friend of the Boudreaux brothers since childhood, Ben has seen both tragedies and joys in the family. And as a former MMA fighter and Krav Maga expert, Ben’s used to fighting for what he wants—and winning. His hands were tied when Savannah married her high school sweetheart not long after graduation, but now two years have passed since Ben found Savannah broken in her own home.

Van’s convinced that happiness isn’t in the cards for her, no matter how right it feels to be in Ben’s strong arms—and his bed. Ben is determined to win her heart and fight for her trust. He’s promised to protect her, to be her friend. But more than anything, he wants to finally make her his, and this is one fight he’s not willing to lose.

Easy Nights is already the sixth book in the ‘Boudreaux Series’ by Kristen Proby. Savannah and Ben, the heroine and hero of this story, are not unfamiliar. We’ve seen them in the previous books in the series; Savannah is one of the Boudreaux siblings and Ben is the close, longtime family friend. With Easy Nights we finally get their from-friends-to-lovers story.

“You didn’t just survive, Van. You thrived. You’re the strongest person I know, and I’m damn proud of you.” I will not cry today. I smile brilliantly at this incredibly handsome man who also happens to be the sweetest I’ve ever known.”

It has been two years since Savannah has escaped her abusive marriage, and she’s doing ok. Well, for the most part, because she still has moments she sees herself as the victim she was. Although she married Lance, Savannah always had a crush on Ben, the guy she has known forever. Even though Lance is out of her life for good, she still is afraid to start something with Ben, scared it will ruin the friendship between their families.

Ben has always had feelings for Savannah; first he loved her like a little sister, but when she started to grow up that changed into a different kind of love. The fallout of her marriage is burned into his brain, and he wants to make her feel better and cherished. But like Savannah, Ben is afraid a relationship and a possible breakup will break the bond he and his Mom have with the Boudreaux family.

Savannah and Ben know each other well. Ben was the friend of her older brothers, and Savannah was the ‘annoying’ little sister that was always there. They didn’t know it, but both had feelings for each other that had nothing to do with ‘just friends’. But life took them into different directions, and now they’re here. Older and wiser, but the feelings are still there. Savannah and Ben have their reasons to fight their feelings, but since this is a Romantic story, they fail… Big time…

Since the beginning of the ‘Boudreaux Series’ I have been curious for Savannah and Ben. It was obvious from the beginning there was something between them, but they didn’t act on it. The end of Savannah’s marriage – and the marriage itself – was horrible, and I’m so happy she’s doing better now. She deserves everything, and I love that she and Ben finally get together. I love Ben, he’s a swoon-worthy guy and I wish more book heroes are like him. Like other Bordeaux books Easy Nights is a sweet story with some twists.

“You’re everything.” He kisses me, his lips much gentler than the rest of him. “You are the beginning and the end of me, Savannah. I don’t work without you.” “You’re my everything too.”

I love Easy Nights, I give the story of Savannah and Ben 4.5 stars. 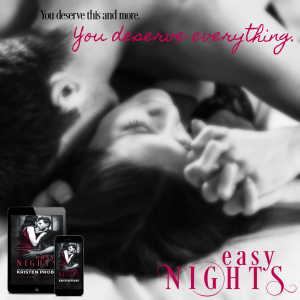 I spin at the sound of Ben’s voice, and silently cringe. I look horrible. I’m sweating like an ice cold drink without a coaster, and the clothes I wear here are skin tight, making it easier to move.

“I had a meeting with another instructor,” he says with a smile. “Thought I’d say hi.”

“Hi.” I smile and readjust my ponytail. It’s much smaller now, but I can still pull it back. “How was your day?”

“Busy,” he replies and surprises me by letting his eyes travel up and down my body. “I like the new hair. You look great.”

“I’m a mess.” I chuckle and hook my towel around my shoulders. “You, however, do look great.”

That’s a fucking understatement. He’s in cargo shorts and a black tank top, showing off his tattoos and his muscles.

“Can I show you a few things?” he asks, breaking my concentration on his muscles.

“Sure,” I frown as I follow him back into the empty classroom. “Am I doing something wrong?”

“No, I just want to go over some form things.” He leads me to the center of the room and stands behind me, looking into my eyes through the mirror.

Oh God. This is way sexier than it probably should be.

I follow his directions and work very hard to not react to his strong hands on my sides as he walks me through punches, kicks, and better ways to keep my center of gravity.

He smiles at me. I can’t keep my eyes off of him in the mirror. The way he moves, his facial expressions.

Ben has always been attractive to me, but holy shit, did he get hotter? Or was I just too broken before to see it?

“I just asked you to do the spin/elbow move.”

“Oh.” I bite my lip and will myself to stop ogling his arms.

“Of course.” I do as he asks and spin, attempting to ram my elbow in his nose, the way I’ve been taught, but he blocks and sends me onto my ass. “Damn it.”

“I’m as clumsy as they get,” I remind him. “If I spin too fast, I’ll fall on my ass. I’ll be helping my attacker more than anything.”

“It’ll actually feel easier,” he says, helping me to my feet. “You can do this. I’ve seen it.”

“You’re taller than anyone else I’ve ever sparred with.”

“Good,” he says and narrows his eyes. “Chances are, if you ever have to defend yourself, your attacker won’t be shorter than you.”

“But if you’re still not comfortable doing this with me, that’s fine. I can make suggestions for Shelly to work on next week.”

“I’m okay,” I reply, and am surprised to realize that it’s true. It wasn’t long ago that I couldn’t stand for any man to touch me, not even my brothers. But I don’t mind so much now.

In fact, I’m utterly shocked to realize that his touch is turning me on. I don’t remember the last time I had sexual thoughts toward a man. Even Ben. Which was one more thing that made me sad.