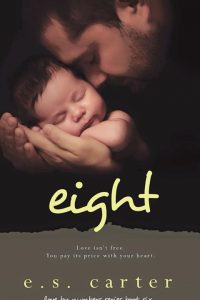 I'm sorry for your loss.
Why do people say that?
When someone you love is taken from you, when a part of you dies along with them, you haven't lost them like you would your car keys or mobile phone. They aren't stuck down the side of the sofa or left in the ignition of your car for you to find later. You haven't absentmindedly put them somewhere and forgotten. You will never lose them because they live in you.
The soul crushing hurt that burns your lungs with every breath you take comes from knowing where they are and not being with them.
The ugly and real definition of grief is being left behind.
I'm sorry they left you.
I'm sorry you are alone.
I'm sorry it hurts to breathe.
Loss; it doesn't even compare.
She was my first love.
She is my last love.
I am an empty husk who pretends to be filled with enough love for those of us she left behind.
Our little girl and newborn son need me.
I am both mother and father now.
I am hollow and empty.
I am a shell.
So why does the girl with the face of an angel and eyes that mirror my emptiness, look at me like I'm her everything?

Eight is the sixth book in the ‘Love by Number Series’ by E.S. Carter, and tells the heartbreaking story of Josh. In the previous book of the series – One – he faced the impossible, and in Eight, we see the aftermath of that horrible event. Although there is a lot of sadness in Eight, I love Josh’s story.

“I’m a body snatcher and a fake. I’m not the Josh from before, and I won’t ever be him again because I was one-half of a whole. Now I’m one-half of nothing.”

Josh is living, but he’s not present. After the death of his beloved wife, he checks out; grief and anger have taken over him, consuming all of his time. He knows he needs to be a better father for his daughter and newborn son, but he just can’t do it. His family – and especially his brother Isaac – helps him in every way they can, but they can’t get through to him. Realizing he needs a new start, Josh moves to Ibiza with his children to be the dad they deserve.
Halle went through her own hell. Ibiza is the first place she feels home, and she finally gets into her own person. Josh isn’t looking for someone, but there’s something special about Halle he can’t overlook.

“I’ve never been loved. I never will be loved. And I deserve everything that has ever happened to me.”

Josh and Halle don’t meet under the best of circumstances. Halle knows about Josh and his history because she works for his brother Nate, but she still thinks he’s a jerk. Josh is still grieving for his lost wife, but he knows he has to do better, for her and for their children. When he and Halle get to know each other, they can’t deny there is something between them. But Josh doesn’t want to move on, isn’t ready for anything else or anybody else. Since this is a romantic story you know Josh and Halle will end up together, but it isn’t an easy road.

I knew before starting Eight this would be an emotional book. The death of Lauren – Josh’s wife – in One wrecked me, you can imagine what Josh’s story would do to me. I feel so sorry for Josh, what he’s going through is horrible, and I fully understand his breakdown. I want to hug him, but there are also moments I want to smack him. (Josh, sweetie, I so get you’re grieving. But you are a DAD. Your kids NEED you!)

Although Eight is the story of Josh and Halle, it’s much more the story of Josh coming to terms with the loss of his wife, and making a new life for himself and his kids. At the end of the book he and Halle are in a good place relationship-wise, but I wanted more. Seeing more of them as a real couple, seeing more of Halle getting the happy she so much deserves.

I love Eight, I give Josh and Halle’s story 4.5 stars. 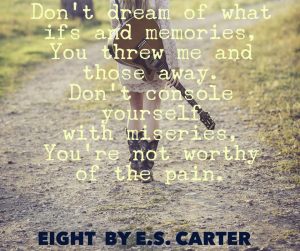