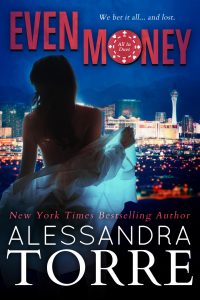 Sometimes it only takes a minute. A connection of eyes across a room, a quickened heartbeat, and everything changes.

I was a cocktail waitress with a fondness for partying and meaningless sex.
He owned half of Vegas and had the reputation to match.

I should have turned away. Instead, I stepped closer.

Then, the lies started.
Rumors spread.
Stalking commenced.
And someone died.

None of it stopped me from falling in love.

When you pick up a book by Alessandra Torre, you know what you get. Characters who live their lives by their rules, not caring what others might think. Even Money is not different. Bell and Dario appear to be a certain way, but there’s so much more to them then meets the eye. I need to know what happens next… Like now!

“A kiss that seduced, then branded. A kiss where he gave as much as he took, and I lost as much as I gained.”

Bell is a Las Vegas cocktail waitress / student who likes her relationships with men casual. She likes sex, but a real relationship isn’t in the cards for her. Her past taught her one thing, in her present she’s the one in control, calling the shots. When she meets Las Vegas legend Dario, Bell feels an instant pull, but she refuses to give in; to give into her feelings and to give into the man himself. But not all is what it seems, and she and Dario hit it off.

“One look and she’d had some sort of a hold on him. One conversation, a few lines about drinks and business, and he was obsessed.”

Like a lot of other characters by this author, Bell and Dario act and think a lot different than I do. Once you get to know them better however, it all makes sense. Both are shaped by their past, both are doing what’s necessary to survive. Bell by keeping people at a distance, Dario by doing what he does. Under her cool persona Bell is really a sweet girl who wants to be loved, but she’s afraid to give in, afraid what it will do to her. Dario is a dark, charismatic man who knows exactly what he wants, even when it can destroy everything. I love the two of them together.

Even Money is the first part of the ‘All In Duet’ and sets up the story of Bell and Dario. It’s told from a double POV, with Bell’s one in first-person and Dario’s POV in third person. Because of this you get to know Bell, but Dario remains an enigma. Does the book end in a cliffhanger? Yes, it does, but luckily the wait for Double Down isn’t that long. I can’t wait for the second book. Not that I have any doubt about Dario and Bell, but there are things going on they can’t control.

“I couldn’t stay away from him. I tried. And you know me. I fought against feeling for him with every ounce in my being, but it still happened.” 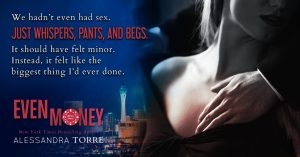