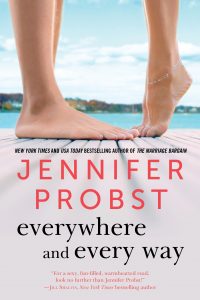 Hot on the heels of her beloved Marriage to a Billionaire novels, New York Times bestselling author Jennifer Probst nails it with the first in an all-new sexy romance series featuring red-hot contractor siblings who give the Property Brothers a run for their money!

Ever the responsible eldest brother, Caleb Pierce started working for his father’s luxury contracting business at a young age, dreaming of one day sitting in the boss’s chair. But his father’s will throws a wrench in his plans by stipulating that Caleb share control of the family business with his two estranged brothers.

Things only get more complicated when demanding high-end home designer Morgan hires Caleb to build her a customized dream house that matches her specifications to a T—or she’ll use her powerful connections to poison the Pierce brothers’ reputation. Not one to ignore a challenge, Caleb vows to get the job done—if only he can stop getting distracted by his new client’s perfect…amenities.

But there’s more to icy Morgan than meets the eye. And Caleb’s not the only one who knows how to use a stud-finder. In fact, Morgan is pretty sure she’s found hers—and he looks quite enticing in a hard hat. As sparks fly between Morgan and Caleb despite his best intentions not to mix business and pleasure, will she finally warm up and help him lay the foundation for everlasting love?

“He knew the road ahead wouldn’t be smooth. No, there’d be twisted paths and dead ends. There’d be fighting and messy emotions. But there’d also be loyalty, and trust, and joy. Love. And home.”

Caleb Pierce is a hardworking man who works for the family construction company. After the death of his father he and his brothers find out the company is left to them, but there are certain stipulations in place. For one year the three brothers have to work and live together, to prove the company is theirs to run. Given the fact Caleb’s brothers were driven away by their cold father, this is a daunting task. The scheming and strong-willed interior designer responsible for the next construction doesn’t make Caleb feeling better, but soon he starts to like her more and more.

“Her appearance screamed pampered Southern belle. Straight silvery blond hair. Big china-blue eyes. Pretty pink mouth. But she’d managed to surprise him. She’d called him Charming. Damn, it had been hard not to laugh at that one.”

Morgan Raines is a driven, successful woman; interior designing is her passion and she’s very good in giving her clients their dream houses. At the brink of adulthood, a horrible illness has destroyed her own personal dreams of raising a family, leaving Morgan with nothing but her work. Having learned the hard way men don’t deal with her issues very well, Morgan dates from time to time, but keeps men at a safe distance. Angry builder Caleb stirs deep buried feeling inside her, making her want more for the first time in a long while.

“So, odd. She should be positively insulted and disgusted by his male behavior. What was it about his smoky eyes that stripped her clothes from her body, saw everything underneath, and made her feel like a sexual wanton? And why, oh, why did she like it?”

From the moment Caleb and Morgan meet, there’s an attraction between them. At first Caleb assumes Morgan is some fancy, spoiled designer, but soon she earns his respect by working side by side with the builders. Morgan tries to tell herself she can’t be involved with a man like Caleb, but soon the two of them can’t stop the feelings they have for each other. They try to keeps things casual, but both Morgan and Caleb fail and soon all becomes much more serious. After some hard times and sadness, the couple has a fair chance at a happily ever after.

Everywhere and Every Way is the first book in the new ‘Billionaire Builders series’ and is written in Jennifer Probst’s typical style. It’s sweet without outrageous situations and external interference in the main couple’s relationship. Caleb and Morgan – especially Morgan – have to reconsider their own believes and what the future might hold for them.

Because this is the first book in a new series, a lot of characters are introduced; the other Pierce brothers and their possible love interests. While I’ve enjoyed meeting these people, in my opinion it took away from the story of Caleb and Morgan. I understand the necessity of the setups for the future books, but I personally want more romance, more of Caleb and Morgan.

“I’m the man who loves you. You’re just going to have to forgive me. Then you’re going to marry me.” “Not with a proposal like that,” she grumbled. He cupped her cheeks and tilted her face up. “God, you’re sweet.” He paused. “God, you’re everything.”

I’ve enjoyed reading Everywhere and Every Way, but due to my issues I give this book 4 stars.