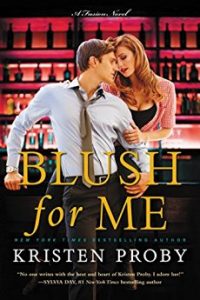 As the take-charge wine bar manager of Seduction, Portland's hottest new restaurant, Katrina Meyers is the definition of no-nonsense, and she isn't afraid of anything. Well, almost anything: she hates to fly. When she's forced to travel on a death trap with wings, the turbulence from hell has her reaching for any safe haven—including the incredibly handsome guy sitting next to her.

Ryan "Mac" MacKenzie hasn't been able to get his sexy seatmate out of his head. The way she clung to him stirred something inside him he didn't think existed: tenderness. As the owner of a successful wine touring company, Mac thinks he's got a handle on what life can throw at him and he's not prepared for any surprises, especially in the feelings department. And when he brings a tour into Seduction, he sees the petite spitfire he just can't forget.

Mac is determined to discover what else they have in common besides fine wine and the inability to keep their hands off each other. But what will it take for two stubborn people to realize that what they have is so much more than a hot chemistry between the sheets and to admit to falling in love…?

Blush for Me is the third book in ‘the Fusion Series’ by Kristen Proby, and continues the stories of the owners of popular restaurant Seduction. Blush for Me focuses on wine connoisseur Kat and Mac, a man she meets while traveling for business. I like their story, but given the two previous books I expected a bit more.

“Are you hitting on me?” I ask, turning to him now, and finding him smiling widely at me, his green eyes lit with humor. “No. I’m offering my hand if you’re afraid.” “But you’re not hitting on me.” Damn. “Not unless you want me to.”

Kat is one of the five owners of Seduction and she loves working with her friends. The wine bar inside Seduction is her specialty, and she knows all about a good wine. Kat is pretty much the bad-ass of the group, lot of tattoos, comfortable in her own skin and afraid of nothing. Well, there is one thing she scared of, flying… Too bad she can’t escape it. Another thing Kat doesn’t do is relationships, commitment is not something she’s ready for. Some hot nights at a conference are okay, but when Mac suddenly shows up at her workplace, Kate doesn’t know what to do with him. Strangle him or kiss him…

“He has a dimple in his left cheek. I want to lick it. I take a sip of my fresh glass of wine and smirk to myself. Perhaps Mac fits the sexcation bill.”

Mac and his brother Chase organize wine tours and tastings throughout Portland. Meeting Kat at a wine conference opens his eyes, he wants to get to know the feisty lady, and unknowingly for more than just hot sex. Mac is like other Kristen Proby’s heroes a sexy, nice guy. Yes, he messed up in the past with his strong will and doing things his way, but he knows this about himself and he is willing to change. Convincing Kat to give their relationship a chance is a lot more work than he thought it would be, but he doesn’t give up.

“And how does wine make you feel?” She thinks for a moment, narrowing her gorgeous brown eyes. “It’s a slow burn,” she begins. “I get warm. My cheeks get a little numb.” She leans in and crooks her finger for me to lower my ear to her. “And even my clit tingles.”

Kat and Mac meet when Kat is not exactly in the right state of mind. Yes, she sees a handsome dude who comforts her, but her fear for flying keeps her busy on the airplane. When it turns out they’re both at the same wine conference, they hit it off. Kat doesn’t mind a good ‘sexcation’, and Mac is a more than willing participant. After the weekend they say goodbye, however their paths keep crossing each other. Mac wants more, but Kat doesn’t and she isn’t easily swayed. But this a Kristen Proby book, so obviously the couple gets a sweet Happily Ever After.

I really like Kat, Mac and their story, but to be honest, I expected a little bit more… I love Kristen Proby’s books; they are sweet and easy reads, but somehow they always speak to me in an emotional way. In Blush for Me I miss the emotional moments and therefor the story fell a little bit flat for me. Besides the main couple it was good to see the couples from the previous books again. I’m very curious for Mia’s story, given the small hints about her history throughout this book.

I live Kat and Mac, but because of my issues I give Blush for Me 3.5 stars. 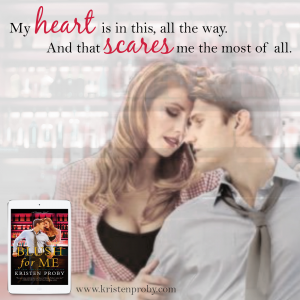 “You’re going to have a great time.” She hugs me close. “There are lots of signs and people to ask if you get lost in there, but it’s not a big airport, so you should be fine. Call me when you get there.”

“If I get there,” I say and sigh deeply. “Why do I feel like I’m never going to see you again?”

“Because you’re being dramatic,” she replies and smiles brightly. “Have fun!”

And with that, she waves and drives away and I’m left alone to figure out this airport hell.

But Riley was right. Checking in and dropping my bag off is easy. Finding security is easy.

Getting frisked by the TSA guy would have been more fun if he’d looked like Charlie Hunnam, but then again, everything would be more fun with Charlie.

I follow the signs, find my gate, and am pleasantly surprised to find a bar directly across from it.

There is a god.

But once at the bar, I’m just too nervous to drink.

Who in the hell gets too nervous to drink? This girl, apparently.

So I wander back to the gate and pace, dragging my small black hard-sided suitcase with red cherries on it behind me. People glance my way, but I ignore them. I’m used to it. You don’t dress the way I do, covered in sleeve tattoos, and not get looks.

Finally, my flight is called and they begin boarding. Before I know it, I’m sitting on the plane, three rows from the front—if I’m going to die, it’s going to be in first class—in the aisle seat.

“Hello,” the man next to me says. I glance his way, taking in his light brown hair and green eyes, and if we were anywhere but here, I would totally flirt with him.

But we’re on a motherfucking airplane.

“Hi,” I reply and swallow hard. The flight attendant asks us if we’d like anything to drink before we take off, but I shake my head no and stare at the pilot sitting in the cock pit. “Don’t they close that door?”

“Right before we take off,” my travel companion says. I’m surprised that I spoke aloud. “Hey, are you okay?”

He’s silent for a moment and I keep staring at the pilot. I want to march up there and tell him to make sure that we get there in one piece. What are his credentials, anyway? I want to see his license, and a few letters of recommendation wouldn’t hurt either.

“I’m Mac.” I slide my eyes to him and nod, then whip my gaze back to the front.