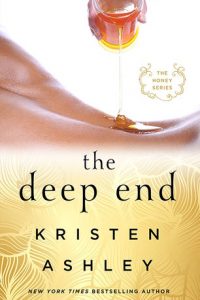 Enter a decadent sensual world where gorgeous alpha males are pleasure slaves committed to fulfilling a woman's every desire. At the elite Honey club, no boundary will be left untested, and one's darkest desires will become a sensual reality.

Olivier isn’t sure what he’s gotten himself into when he joins the Honey Club, only that a dark part of him craves the lifestyle offered by this secret, exclusive club.

When Amélie invites Olivier to surrender, she pushes him to explore his deepest desires as a submissive. As they grow closer and find themselves falling harder than either of them anticipated, the truth about Olivier’s past could threaten the budding relationship they both long for.

Gripping and seductive, The Deep End is the first book in a sensational new series from bestselling author Kristen Ashley.

“It was coming clear she was giving more than she was receiving. She was assuaging a need and not having her own needs assuaged. No. That wasn’t it. She wasn’t finding what she needed. In play or in life.”

“Staring at him, utterly incapable of not doing it openly, she felt the insides of her thighs tingle. And her nipples were hard buds, the restriction of the lace of her bra suddenly excruciating. That… Now that was whisky.”

Olivier comes from a normal family and works as a firefighter. He loves his job and spends his free time with his friends. Since he discovered in his teens there’s more than just vanilla sex, it has always been in the back of his mind. Yes, he has had girlfriends and flings, but he never asked them to tie him up and dominate him. Now, in his early thirties, Olivier can no longer deny his cravings. With the help of a friend, he’s able to get into the Bee’s Honey, an exclusive BDSM club. Amélie and her play scare him, but he also needs what she does to him.

“What she’d done to him, how hard he’d come, how fucking beautiful she was, that clingy, dark-green wraparound dress she wore, tits that were high and full, hips curvy, a sweet round ass, all this on a slender, almost delicate frame, he couldn’t get it out of his head.”

The Deep End is not your normal Kristen Ashley book. While I’ve enjoyed it, it has a much different feel to it. This time the author not only writes the hero’s POV in the third person, but also the Heroine’s. It took me some time to get used to it, but after the first couple of chapters I didn’t notice it anymore. Amélie is a rich woman with an (assumingly) expensive education. Maybe this is the reason her persona has such a formal way of speaking. Olivier, on the other hand, is more of the usual KA hero; honest, straightforward, and a bit rough around the edges. My only real complaint about The Deep End; Olivier and Amélie spend too much time having sex, I wanted to see more of them in real life in a world so beautifully described by KA.

“The shadows clearing in her eyes, the backs becoming brighter because the shit was done and what they had to look forward to was not shadows. It was light. And when they were both there, Leigh felt it, tilted her head, and pressed her lips to his. He opened his over hers and kissed her. And fuck him, just like Leigh, she gave him back exactly what he needed.”

Mirabelle was extending her phone, which was good and bad.

Good because Amélie had not managed to unobtrusively deep breathe, her shallow breaths making her feel light-headed, and she needed something else to focus on.

Bad because what she was focusing on would be the profile of that beast.

She took Mirabelle’s phone and turned it her way.

O.H.
Security: Kitten
Hobbies: Everything
Limitations: Nothing
Notes: None

INITIALS OR OTHER IDENTIFIER
Safe word: Kitten
Inclinations: Into anything
Boundaries, Rules, Unacceptable Play: None

Even with those few words, it was a surprising profile. Experienced subs, the only ones allowed on the floor, knew their boundaries and most had them. In this club, the vast majority were extreme, such as branding, marking, scarring, strangling, sensory deprivation, and so on.

But they had them.

She hadn’t seen a profile that open in a long time.

And the safe word “kitten” showed the beast had a sense of humor. He had the look that just uttering that cute word, which would bring images of the adorable creatures, would make him violently ill.

“Go hit that, tigress,” Mirabelle urged, and Amélie looked to her.

Before she could say a word, Mirabelle continued.

“Get in there. Three times here, he’ll have heard of you. He’ll be holding out in hopes you’ll be extending the invitation to initiating him to our playrooms. I know it.” She leaned across the table. “Rock his world, lovely.”

She studied her friend, the open excitement, the budding love she was experiencing with her submissive, that time when life takes on clarity so pure and extraordinary, you want everyone to experience it with you.

She turned her head to the beast.

Years of experience only marred twice by two toys she’d had who held great promise, but who eventually fell short of the real thing, taught her that tonight, she would definitely enjoy herself.

The bottom line was that she had to keep expectations low so she wouldn’t be devastated when he didn’t turn out to be top-shelf whisky.