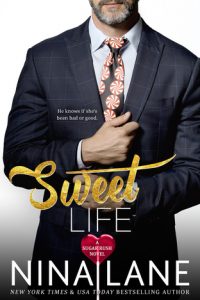 He knows if she's been bad or good.

Amidst the sugarplums and mistletoe, fashion stylist Julia Bennett is every inch a scrooge. Known for her ice-queen ways, she's having a meltdown over a botched business deal and an upcoming milestone birthday. Add the pressure of forced holiday cheer, and she's ready to dive into the spiked eggnog and not come out until summer.

Warren Stone, president and owner of the Sugar Rush Candy Company, is determined to make Julia slow down and enjoy the holidays. As her friend and confidante for fourteen years, he knows her better than anyone. But when decking the halls leads them to an explosive, sexy night, everything suddenly changes.

Just when Julia thinks Warren is all she wants for Christmas, an old flame comes to town and reminds her of the carefree girl she used to be. As the new year approaches, Julia is forced to decide if she wants to relive the past or embrace the future.

Is 50 too old to fall in love again? No! Sweet Life is the sweet story of Julia and Warren, who have known each other for ages, but finally are ready to admit there’s a whole lot more between them. Together they prove 50 is certainly not too old to find new love, and that they’re just as passionate as the younger generation.

“What happened to the words I love you when you kept them trapped inside for so long? Lacking air and light, did they wilt and fall apart like old flowers? Or was it like nurturing little seeds, keeping them safe and warm so that one day they might flourish in the sunlight?”

Julia is a hard-working woman who’s known as the Ice Queen; she gives everything her full attention and expects that from others as well. She has no family of her own, but she is very much involved with the husband and children of her late sister. After the death of Rebecca, Julia stepped in, not so much as a mother, but as an aunt and friend. Warren is her brother-in-law, but deep down she loves him.

Warren was devastated by the death of Rebecca, but their children made him go on, with the help of Julia. Over the years he wasn’t a monk, but no woman ‘was good enough’ to replace his beloved wife. For the past thirteen years Warren and Julia have been close friends, spending much time together with the kids and around town. One kiss under a mistletoe makes Warren realize Julia is so much more than just a friend.

“He’d loved fiercely, felt joy so big his heart couldn’t contain it all, and clawed his way up through the black hole of grief. Now he knew the touch of Julia’s lips was a gift. She was a gift.”

Sweet Life is my first read by Nina Lane, and I was a bit worried I would miss background information since this is the fifth book in ‘the Sugar Rush Series’. Luckily this was not the case, but I’m curious now for the stories of the Stone brothers and their women. Sweet Life is written in a pleasant style and reads easily away. The story is told from a double POV; giving Warren and Julia their own voices, letting the reader see their inner thoughts.

From the blurb I expected a from-friends-to-lovers story, but because I haven’t read the previous books in the series, the family aspect of their relation was a welcome surprise. I get Julia’s reservations about her and Warren; he was married to her sister after all, but she’s gone for a long time. I love Julia and Warren together, they are the prove you don’t have to be young to find love. And besides that, they’re not that old.

“A love lost. A love found. The rest of his life to live.”

“You’re firing me?” Julia stared at him, her eyes widening. “Are you serious?”

“Yes.” He steeled himself against her shock and the knowledge that he was hurting her. “You’ve planned it for the past ten years, and it’s time to hand it over to someone else.”

“You don’t get to decide that.”

“Yes, I do. Sugar Rush is my company. This is also the event where I’ll be announcing my retirement. You’re not going to plan it.”

“Because I have too much on my plate?” Julia stopped in front of the windows, her arms crossed and her fiery gaze fixed on him. “Thanks for your concern, Daddy, but I assure you I can handle everything I take on.”

“That’s why you’re such a success. It’s also why your headaches are getting worse.”

“You are not my fucking doctor.”

She barked out a laugh. “You need to rethink this retirement thing, Warren. It’s making you soft.”

Given the state of his dick, he was anything but soft.

“If you won’t delegate your projects, I will,” he said.

“Because you can’t stop being the boss, even if you think otherwise.” Julia paced angrily to the desk, her eyes flaring with blue ice. “Why are you retiring, Warren? Everyone knows you’re the power behind the throne, much as you’ve let the boys take all the glory. Three months—hell, one month from now when you have nothing to do and no one to order around, you’re going to wonder why you made such a bad decision.”

Warren’s jaw clenched. He was sick of getting pushback from all sides. “I’ve been in business my entire life. I know what I’m doing.”

“I will always look out for you.”

She came to a halt, her whole body stilling. By contrast, Warren’s heartbeat kicked up, sudden heat flooding his veins. Their gazes met across the room, a crackling electric current firing through the air.

Julia took a breath, her breasts heaving beneath her jacket.

“Goddamn you, Warren Stone,” she whispered.

Rebellion tightened her features. “And if I don’t?”

“You sure you want to find out?”

He closed the distance between them, his lust flaring like a match to dry leaves.

What the fuck was going on with them?

The question flared like a comet through his mind and died just as fast—because he didn’t care about the answer. His mind was consumed with the thought of tasting her red lips again, sweet like cherries, spicy like peppers. Her mouth could deliver an insult as sharp and searing as a blade, but he knew—had always known, even if he’d smothered the knowledge—that the sounds issuing from Julia Bennett’s mouth could also be smooth, hot murmurs of lust that rushed straight to his blood. Weakening him of all thought, all control, inciting him with the urge to—

He grabbed her shoulders, hauling her soft, slender body against him. He’d always loved the contrast of Julia, the sharp-tongued, acidic queen and the relentlessly devoted aunt. The rigorous boss who shot orders like arrows, and the loyal friend who bought Hailey’s favorite peanut butter, sent care packages to Gavin Knight when he was deployed in Iraq, spent hours on end with Evan at the hospital.

He stared down at her fine features, pale skin, and wide blue eyes that he’d seen almost every day of his life for the past thirteen years—and suddenly now it felt as if he were looking at her for the first time. Had he never noticed that tiny birthmark right beneath her left eye? Or the silver flecks in her irises, like falling snow? Or the perfect curve in her upper lip, tempting him to put his tongue there and—

“What the hell am I going to do with you, Julia?” he muttered.

“Fire me, apparently.” Her tone was bitter, her eyes blue fire.

Her gaze flickered involuntarily to his mouth, her lips parting. He slipped his hand beneath her chin, lifting her face to his. His heart jackhammered. Her breath brushed against his mouth, the familiar scent of her—Chanel No. 5, lavender soap, pure Julia—suddenly exotic and tantalizing.

“I’m going to let you go,” he said slowly, “and take two steps back. I want you to reach under your skirt and take your underwear off… if you’re wearing any.”