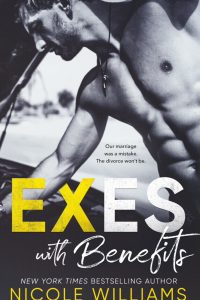 He wants a second chance. I want a divorce. To get what I want, I’ll have to give him what he does.

The only benefit I want from my ex is a divorce.

We got married for all the wrong reasons. The one thing we got right was our separation. I should have known better than to think I could bet on forever with a guy like Canaan Ford. Everything about him screamed impermanent, from his wild eyes to his restless soul.

When I left him and the small town I’d spent my whole life in, I swore I’d never go back. Never only turned out to be five years. Canaan claims he’s changed, but he hasn’t—same knowing smile, same rough demeanor, same body crafted from sin and sinew. And yet, something is different. He thinks this is his chance for redemption. My disagreement comes in the form of divorce papers dropped in his lap. He refuses to sign them. Unless . . .

He wants a month to prove himself to me—that’s his offer. One month to make me fall in love with him again and if I don’t, he’ll sign the papers. As much as I want to say no, I agree. I can suffer my ex for a short amount of time if that’s what it takes to be free of him once and for all. I fell for him once; I won’t make that same mistake twice.

He says we’re not over. I say we were over before we got started. Only one of us can be right, and I can’t let it be him.

A second-chance. Could you fall all over again for the man that drove you away? Nicole Williams’s Exes with Benefits tells the story of Maggie and Canaan, a story full of emotions, regrets and secrets. I love it.

“Canaan. I hadn’t seen or heard from him since that night. It was almost like he’d never existed. Save for that gaping hole I felt in my chest from time to time when a memory of him broke free of the box I kept them locked in.”

Maggie and Canaan married young, barely adults. But what started as sweet happiness, quickly spiraled out of control. Canaan was on a destructive path and didn’t want to talk to Maggie about it, which ultimately drove her away. Maggie loved Canaan with all her heart, but it wasn’t enough. Leaving him behind was the only way she could survive, so she did. When Maggie returns, five years have gone by and she has moved on. She doesn’t want to admit it, but seeing Canaan again brings back feelings, and he seemed like a changed man. All Canaan wants is his wife back, to finally start the life they should have be living in the first place.

“I married you because I loved you.” He said each word purposely, the tremor of anger rattling his voice. Fighting. The one thing in our marriage we’d done really well. “It’s not just enough to tell someone you love them. You have to show them.”

Like other books by this author, Exes with Benefits is a beautifully written story with characters who act and talk realistically. Although it’s basically a simple story – a couple getting a second-chance – the storytelling of the author holds your attention throughout the book. The story is told through Maggie’s eyes, giving an insight in her thoughts and emotions. We get to see the couple as the adults they’re today, but we also get to know what drove them apart all those years ago.

A lot of times a simple miscommunication causes the breakup, but that’s not the case with Canaan and Maggie. Canaan was very broken young man, had every reason for it, but he chose the wrong way to deal with it. My heart broke for Maggie, Canaan hurt her so much; she left him with all kinds of assumptions, which have colored her feelings for him to this day. When all was out in the open I was so happy for them, they deserve a second-chance.

“I finally realized why our story had never ended. Because we weren’t finished—we never would be. There was no ending where Canaan and I were concerned. ‘Til death do us part . . . and beyond.”

I love Exes with Benefits, I give the story of Canaan and Maggie 4.5 stars. 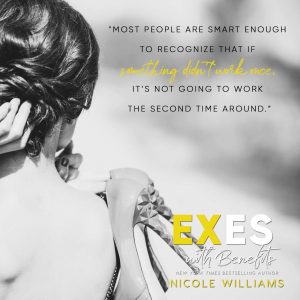 “One month. That’s nothing in the scope of a person’s life.” He slid a bit closer.

“One month is everything when it comes to opening myself back up to you.”

He didn’t argue that. He let silence speak for him instead.

“What exactly are you expecting during this one month?” I might have winced when I heard myself say those words.

He rubbed his mouth, trying to hide whatever was trying to form. “For you to give me another chance. For you to be my wife.”

The term made me nauseated. “Your wife? As in your indentured servant? No way.”

It was a smile he was trying to hide. Not very successfully. It made me thankful I’d slipped into these old boots so I could give him a solid kick in the ass if necessary.

“Like be willing to spend time with me. That’s it. That’s all,” he added when he correctly interpreted the question in my eyes. The question.

“What will we be doing during that time we’re spending together?” I pulled at the chest of my dress when I noticed the way his gaze had lingered there a moment too long.

His shoulder rose. “Got any ideas?” There was an unmistakable glint in his eyes.

“No,” I answered instantly.

“You used to have plenty of ideas for filling the time.” He took a swig of his Coke.
“And then I learned how to use my brain.”

I held my best poker face, considering his offer. I didn’t want to stay married to him. If one more month was what it took to be free of Canaan Ford, I could suck it up. I’d already made it five years. “No expectations of anything of a physical nature?”

“If I remember right”—his eyes narrowed as he rubbed the back of his head—“it was generally you who instigated all of that back then.”

My jaw ground as I worked to erase that word from my conscious where he was concerned. “And you were just the perfect gentleman.”

Canaan snatched my hand before I could pull it away. Holding onto it, he dragged me closer. Not so close that our bodies touched, but close enough the separation was painful.

“Exactly,” he said in that low voice of his. The one he’d whispered my name in so many times as he moved inside me. “A gentleman gives his woman exactly what she needs. As many times as she need it. Just doing my part.”

“That’s right. So if you want to make any changes to this one month agreement, consider me your humble servant.” When his hand dropped to my waist, his touch hesitant at the same time it was insistent, I didn’t flinch out of instinct the way I should have.

Instead, I had to remind myself to pull away from him; to flinch at his touch. “I have a boyfriend, Canaan.” Even to my ears, it sounded like a weak protest.

His hand didn’t fall away when I stepped back. “You’re a married woman, Maggie.”

“My husband forfeited his rights years ago.” My eyes found his, expecting them to shoot away once mine made contact.

They didn’t. His gold eyes held to mine. “He’s here to reclaim them.” 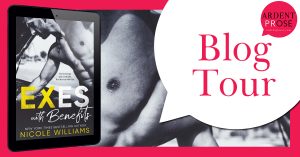