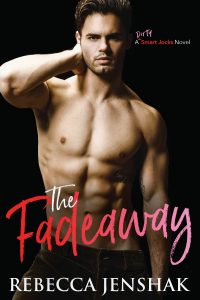 This college jock is a total player. He’s used to getting who and what he wants. Until her…

Katrina
The hottest guy on campus won’t stop asking me out. I know that sounds like a good problem to have, but this guy… this guy has no idea how complicated my life is trying to juggle being a single mom and college student.

Every Thursday, he shows up at the café where I work. His cheesy pickup lines and arrogance should have me completely annoyed. I’m not. I can’t say yes, but Thursday is my favorite day of the week.

Joel
The hottest girl on campus won’t go out with me. I know, I know, that sounds presumptuous, but this girl… this girl has gotten under my skin, and I can’t seem to walk away.

Every Thursday, I show up at the café where she works. She’s fed me every excuse in the book. I should give up and bang one of the many girls blowing up my phone. I’m not. Even when she says no, Thursday is my favorite day of the week.

Falling in love in college? That’s not the most difficult thing in the world. But what if your world is more then just you? Meet Katrina; student and single mom. She should stay far away from popular jock Joel but resisting him is hard. The Fadeaway tells their charming story.

“We play this game every week. He hits on me and I turn him down. He thinks we’re playing the longest game of hard-to-get ever. We’re not. Or, I’m not anyway.”

Katrina is a hard-working student. Besides her study and her part-time job, the main man in her life is her 3-year-old son Christian. She gets help from the grandparents and Christian’s dad, but most of the time its just the two of them. Love isn’t on her radar, but it’s hard to resist a persistent guy with a crush. Joel is the man of the campus, destined for greatness with the basketball game. He’s doesn’t mind the sport groupies, but the moment Katrina is on his radar she’s it for him. And now, he has to play a different game… Good luck Joel…

“She makes a little sound somewhere between a scoff and a laugh that sounds like the sweetest purr. I smile. She’s not a Kat, she’s a cute, playful Kitty.”

Katrina and Joel are a swoon worthy couple. They still young, but life has given them both some hard life lessons already. Joel had his heart broken, and Katrina had to learn to juggle being a mom and student. Both are not looking for love, but they see that special spark in each other. I love the normalness of their developing relationship, no crazy over-the-top angst-y moments or meddling exes. Just two young people falling for each other and trying to make it work.

The Fadeaway is my very first book by Rebecca Jenshak, and I have really enjoyed reading it. It’s book 2 in the ‘Smart Jocks Series’, but I didn’t feel like I was missing something from the previous book. Katrina and Joel are a realistic young couple; they’re getting to know each other, but at the same time it’s business as usual with their lives. Joel and Katrina are very likeable characters, and I love them for each other.

“What do you say, Kitty? Go out with me?” I say yes, like I wanted to from the first time he asked.”